There are two videos below, both of which I shot, very professionally, by holding up my phone while I rode my bicycle to work.

These videos were shot on two roads that run parallel to each other one block apart.

Video one shows a quiet residential road with slow-moving cars and — and this is the important part — people on bikes.

The second video is a busy road filled with buses and impatient motorists and, importantly, nobody else on a bike, other than your rather shaky cameraman.

Which one features the dedicated bike route?

Wrong. The road with the dedicated bike lane is seen in the second video . The right-hand lane that I’m riding in is a shared bus/bike lane, as indicated by this sign. 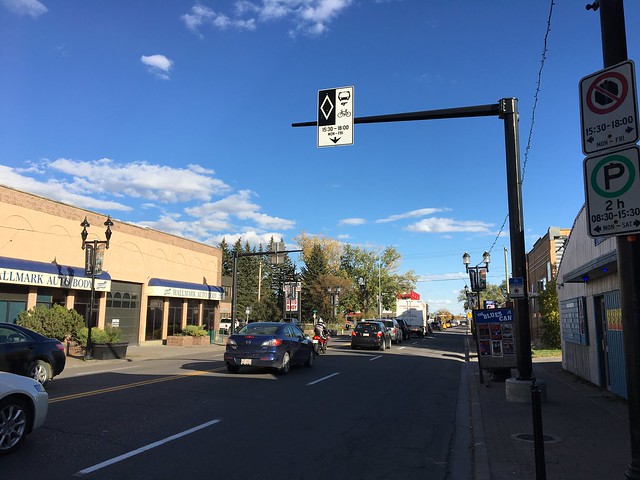 Here’s a closeup of the sign, indicating that, during rush hour, the parking lane turns into a shared lane dedicated to buses and bikes. 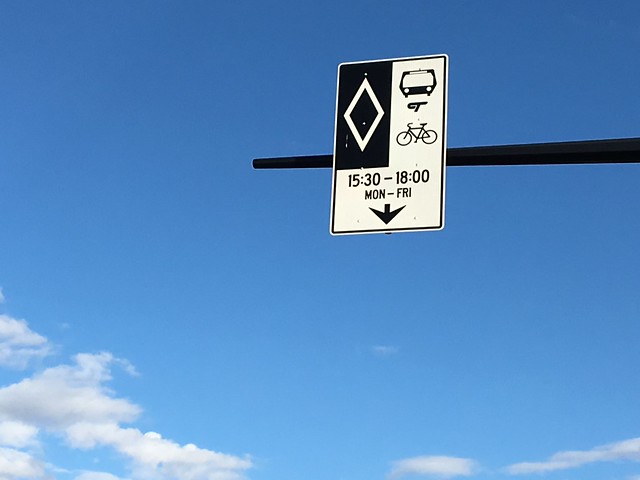 Yet, there are no bikes in this lane. In fact, I don’t recall ever seeing a bike in this lane, mostly because I avoid the lane myself on most days. It’s busy with cars, shared with buses that cut me off regularly to drop passengers, and often filled with illegally parked cars. It’s a poor bike lane.

The first video shows where I usually ride, on a parallel route one block away that is usually filled with fellow cyclists. Many days, I count more bikes than cars, which is rather novel in my city.

So what gives? There’s much to talk about in this scenario (here, I’ll get you started: Shared bus-bike lanes suck, bike lanes that exist only during rush hour suck, people who illegally park their cars in shared bus-bike lanes suck), but the thing that always jumps into my mind is this: If you want to build well-used bike lanes, listen to cyclists. And listening doesn’t always mean talking — paying attention to the way actual people on bikes behave can go a long way to building well-used bike infrastructure.

The shared bus-bike lane was installed on this stretch of road several years ago, to the consternation of nearly everybody who uses the road. Users worried the parking lanes that transformed into shared bus-bike lanes during rush hour would be dangerous and confusing to bus drivers, motorists and cyclists. Since then, there hasn’t been much to those worries, mostly because so few cyclists use it. Cyclists are voting with their feet (well, their wheels) and choosing the nice quiet residential road one block away.

With cycling, it can be tricky to assess desire lines before infrastructure is built because so few will brave sections of a city perceived to be dangerous, but there are situations that it makes more sense to accommodate cyclists where they are, rather than where city planners want them to be.

This can be done is ways simple to complex. Surveys can work. So can watching for the tracks of bike in a fresh snowfall. You can also use technology. In my city, planners look at data from fitness-tracking app Strava to see the routes of users, albeit a limited cross-section of users (despite the above example, Calgary does a decent job watching cyclist behaviour). Some cities have developed tracking apps used to collect data from the travels of volunteer users. All of these methods offer insight into the ways cyclists move through cities in the real world.

This isn’t an argument in favour of moving bike lanes off of busy roads. An important part of the success of that residential road — perhaps the most important part — is that it has top-notch connections to a network of separated bike path that brings commuters right downtown.

Rather, this is an argument in favour of cyclist-centric planning, where bike routes are designed for use in the real world, not in ways we might imagine them being used.