Riding a bike is only the best thing ever, so of course you want to do it all winter long. But you’re frightened. All that cold, snow and ice is intimidating.

But after more than a decade of riding through northern winters, I’ve learned a secret: Those are not the things you should be afraid of.

Cold, for example, is the easiest problem for a winter cyclist to tackle. Pedalling legs are like bellows of your internal furnace: Once they get moving, your body will warm. In fact, the real risk in winter is dressing too warmly.

Snow? Pshaw. Snow may have been a problem at some point, but there are plenty of ways to deal with snow these days. Fat bikes will get you through pretty much anything shallower than your shin. A taxpayer-funded snow plow clearing a bike lane in a timely way is even better.

And don’t worry about ice. If you live in an ice-prone area, studded tires are like the magical traction fairies of winter. Even putting a single studded tire on the front of wheel of your bike will work wonders. Two studded tires will make you feel like you’re riding a Zamboni.

Nope, those are easy problems to deal with. What you really need to worry about is this: 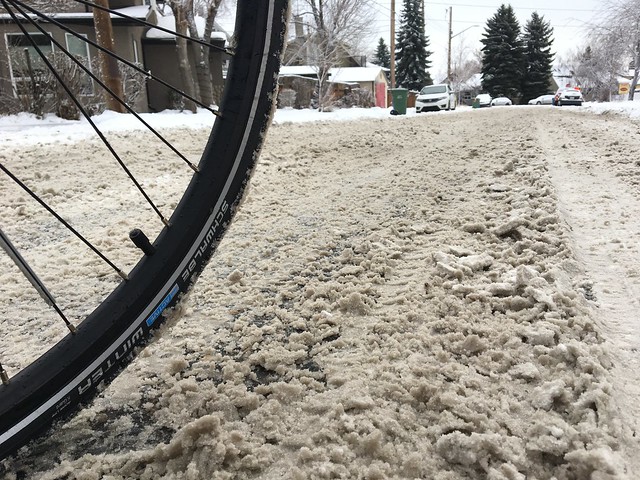 That mashed-potato mixture of snow and dirt is snirt, the most worrying part of a winter bike commute. Photo by Tom Babin.

This is snirt. It’s a deadly mixture of snow and dirt (hence, snirt), mashed together by passing vehicles into a loose, soft concoction that seems sent from a wintry hell to make your blissful winter ride worrisome. 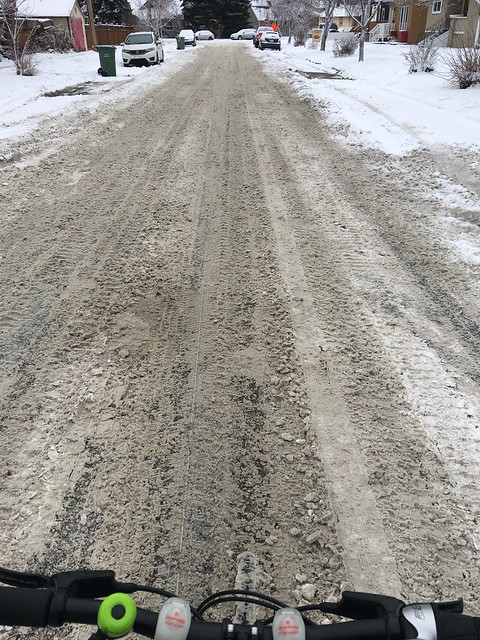 Snow and ice is no problem for my winter commute. This stuff, however, is worrying. Photo by Tom Babin.

Snirt is an unfortunate side effect of urban winter, and it’s worrying because it tends to lift up bikes and float them around in unpredictable ways. Over the years, I’ve learned to deal with all kinds of snow, ice and cold, but snirt is the one element that still gives me willies in the night.

There are ways to minimize the impact of snirt. I’ve found that two extremes make a difference. A skinny road bike tire can sometimes cut through small batches of snirt to the more stable stuff below, and a fat-bike tire can sometimes power through it (studs in both cases certainly help). But I’ve yet to find a fool-proof tactic for staying stable in all cases.

So here’s my advice: Learn to live with snirt. You can’t beat it, so give it respect. Avoid it wherever you can. That may mean choosing a route that avoids unplowed side streets. It may mean choosing a line of shallow snirt through a deeper pile of snirt. It may mean riding for a short stretch on a section of the road (or, ahem, sidewalk) that is cleared, even if you’d normally avoid doing so. It may mean getting off and walking through certain patches. Or it may mean taking transit for a day or two after a snowfall until the plows have come by.

Once you’ve come to terms with the reality of snirt, you’ve officially vanquished all legitimate fears about riding in winter. Which means you can get back to enjoying the ride. And in winter, few things are as fun and rewarding as a good bike ride.