This sounds stupid, I know, but one of the keys to happy urban cycling is learning how to slow down. Riding more slowly in a city is safer, calmer, more relaxing and is conducive to being in the moment and enjoying the surroundings.

So why is that hard? Because much of the bicycle industry is working against it.

In North America, the bicycle industry is still dominated by a mentality of athletics. There’s money to be made by selling bikes as a piece of sporting equipment, so that’s what draws the attention of the industry. Road bikes, mountain bikes, triathlon bikes, cyclocross bikes and even fat bikes are built to go fast. They are built for racing. 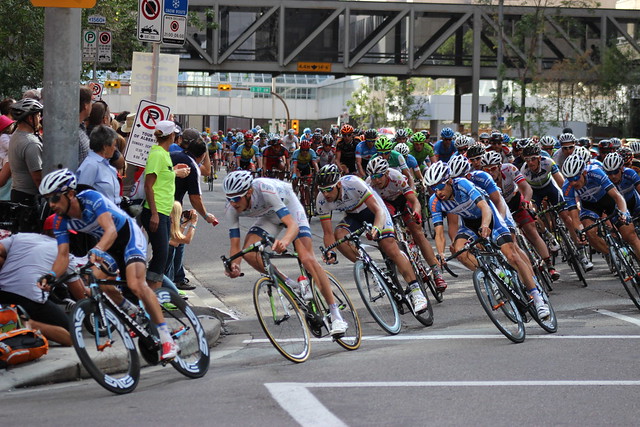 The bikes of these professional racers are built for speed. Photo by Tom Babin.

That approach has led to some amazing technological breakthroughs that have benefited all cyclists, but you don’t need any of it to ride happily in a city. In fact, much of that tech impairs your ability to ride slowly and comfortably. Those feather-light, high-performance bikes feel like riding a thoroughbred — they hum beneath your fingers, pulling to go fast whether you want them to or not. It can be exhilarating if that’s your goal, but taking them through an urban setting is like using a racehorse for a children’s pony ride — superhuman restraint is required to keep them under control.

Part of the problem is body position. Bicycles with humans aboard don’t exactly create a shape that slips through the air, so much engineering brainpower has gone into designing bicycles that torque the rider’s position into one that’s more streamlined. The result is that many bikes force the rider to into a low, forward-leaning position. This works wonderfully if you are descending Mount Ventoux with 100 other pros chasing, but if all you are doing is heading to the liquor store for a six pack, this position can be uncomfortable, unforgiving and needlessly fast. 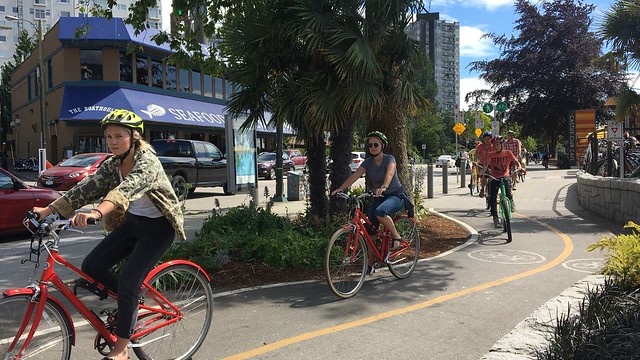 Slow bikes position your body in a way that changes the riding experience. Photo by Tom Babin.

I’ve found that these factors influence your mentality on the bike. When you ride a bike built for speed, you naturally want to go fast. The ride becomes a race, against others or yourself. I’ve often caught myself on my commute home in self-congratulatory mode after climbing a hill faster than a fellow bike commuter who had no idea a race was underway.

Being fast isn’t inherently bad, but when the ride is a practical route for transportation the sacrifices for speed can be. The price of speed is collected in things like comfort, safety, robustness, frustration and something that might be described as pleasantness.

Urban rides, with their many stops and proximity to other humans on foot, work better when the speed is reduced. These rides are most enjoyable when you can sit back, watch the surroundings, obey traffic signals and arrive at your destination faster than a car and without smelling like a workout room.

Yes, you can just reduce your pedalling cadence to go slower. But doing so on a fast bike is difficult. Eventually, you’ll find yourself pushing the speedometer up until you catch yourself breaking a sweat and patting yourself on the back for your time.

I’ve found the best way to slow down is to ride a slow bike. The frame of an urban cruiser will put you in a comfortable and slow upright position, and minimal gears will keep your speed below the limit. A basket or carrier will give you plenty of hauling space, with just enough risk of losing your load to keep your ride in check. All of these forces conspire to do one thing: Make your ride pleasant. You’ll notice your surroundings. You might catch sight of an acquaintance and have time to wave or stop for a chat. You’ll see your city in a new way. Yes, it will increase your transportation time, but I’m betting not as much as you think.

It’s a different way of riding a bike, and it has its own unique pleasures. But you might want to keep that racing bike on hand. You never know when a race might break out.

Readers had some fantastic ideas for slowing down. Here are some of them:

My pregnant belly got too big and I could no longer reach the drops on my commuter, a road bike. I was transformed into a slow rider overnight and I've never looked back (and never ridden the roadie again). https://t.co/PJ8ziaQtFu

Get old. Worked for me, especially in the snow, I get so nervous I slow right down.

as to the real intent of the article?
Let some air out of your tires.
I aired mine up again this morning and am fast again.

Great read. I'm a slow rider on a fast bike (80s Bianchi). I slowed down after moving to the Downtown Core, where river paths and cycle tracks demand casual speeds (I love it). I'll be looking for a cheap used city bike this year so I can stop hunching over at every intersection.

I know exactly what you mean. Started off commuting on road bike. Then got a single speed. That broke, and I ended up on an imported used Dutch bike. It’s slow and easily the best comuter I’ve had. I can even carry stuff now! Love going slow along the river. Low maintenance too!

Gear down and pedal faster is a beneficial aerobic workout at slower speeds. Aim for a steady 85-95 cadence. Higher if you can.

How to ride a bike in snow