Face it, riding a bike takes work. That’s one of its joys

Here’s one thing about riding a bicycle that’s worth being honest about: it takes work.

The work of riding a bicycle can be hidden under the poetry of riding a bicycle. I will always remember the day a friend at work texted me, after having renewed a lagged friendship with her bike, a message that was music to my ears:

I knew immediately what Laurie meant. I felt it in my old bones. A green Mustang two-speed was my first declaration of independence growing up on the streets and alleys of northeast Edmonton. That precious bike took me out of the orbit of domestic surveillance, such as it was in the 1970s, the golden age of parental benign neglect. Still, I got to the landmarks of my childhood—Bing’s corner store near Delwood Road, the St. Francis football field, the newspaper shack on Fort Road, the hills on the far side of Yellowhead Trail—by myself, or, what was better, rolling there with a gang of my friends. 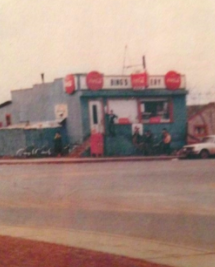 Bing’s, back in the day.

These days, my red Rockhopper is my ticket to freedom. I redeem that ticket at the end of every abstract, unsatisfying and stressful work day. By the time I have pedalled my daily commute’s 10 kilometres home, under trees and sky, across real asphalt, I invariably feel better, lighter, happier. Friends who understand neuroscience explain this is because physical activity stimulates the drip-release of brain chemicals that regulate my emotions. I am not aware of these processes as they lift my mood a notch or two, but I trust there is something like this at work. 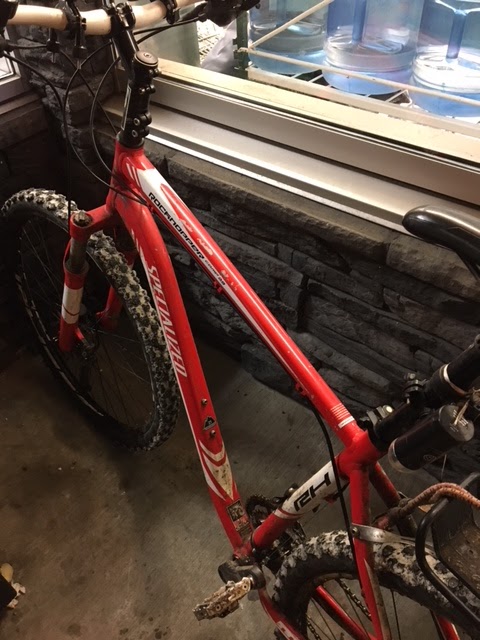 My bike at IGA these days.

The work of bicycle riding is easier to see when I contemplate what I can see and feel from the saddle. Feet press, calves fire, quad muscles lift and fall, lungs expand—and all this just to achieve a comfortable cruising clip. Confront a rise in the road or a shard of headwind and there is more work to be done. There is still more work if any level of negotiation with lactic acid is required to keep going. There is also the work of the nerves. Less so, admittedly, now that protected bicycle lanes have materialized in cities, including Calgary and Edmonton, but, still, this work of vigilance is required in what remains an automobile landscape. And, then, the work to ignore the little aches and pains that come from using our own muscles to power the bicycles that makes us feel so…well, so…freakin’ …free. 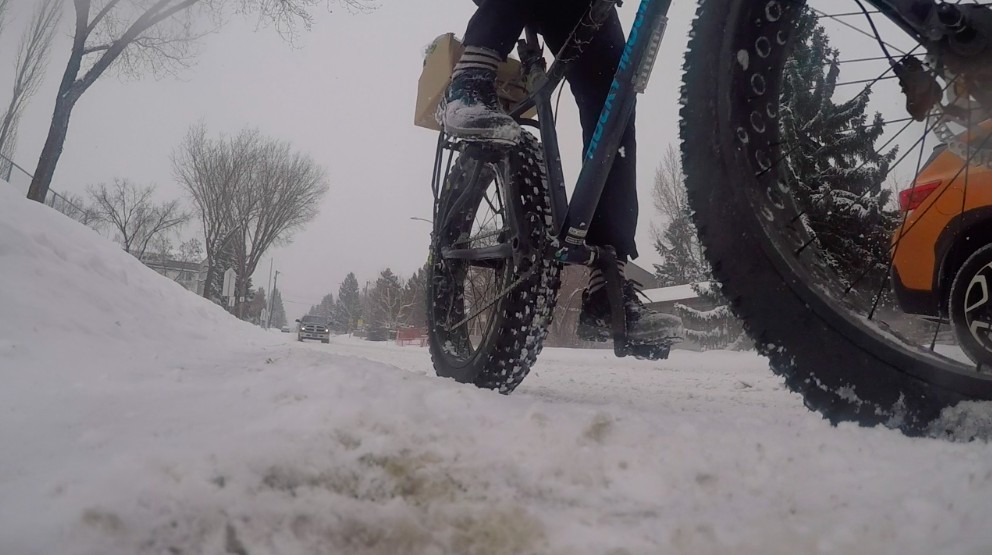 When you stop to think about it, this feeling of freedom known to bicycle riders is the result of a very curious, very human kind of work: the work with—or in—a machine. Bicycle riders may sing paeans to their automobile-free mode of transport, but they benefit from a technological partnership just the same. It is just as true to say I feel so frickin’ free on this as it is to say I feel so frickin’ free when I apply to myself a prosthetic device of tubes, gears, chain, teeth, cranks, cassette, saddle, stays, cables, rubber, rims and spokes. Granted, not in the iambic pentameter of the text message, but the list of the bicycle’s artifice, all the infrastructure it needs to help produce the freedom, is also the truth. 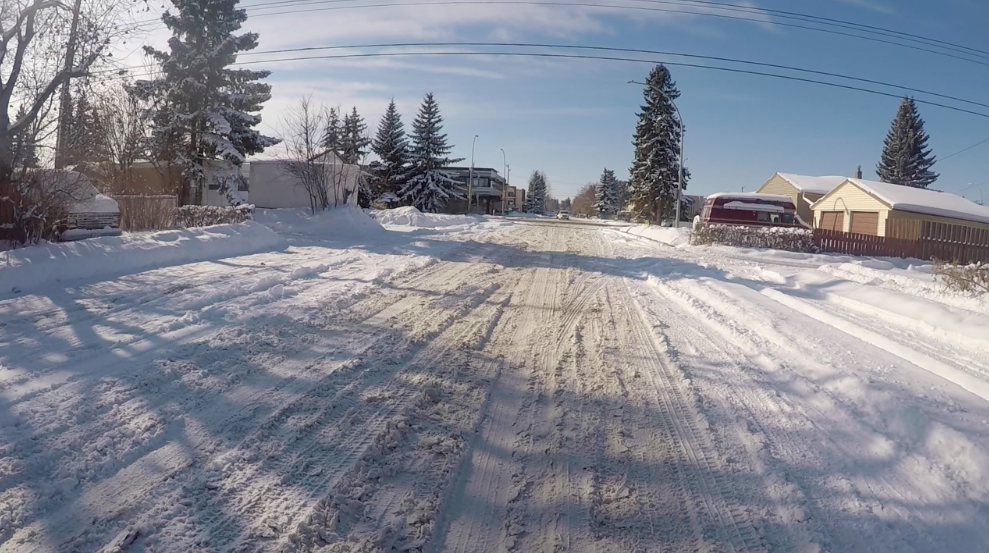 Beautiful out there today.

These thoughts rolled around in my head today as I pedalled my fatbike along the side streets of Edmonton, the host city of a dump of glittering snow a day ago that has now turned to slurry. It is beautiful to move by bicycle in this enchanted setting. It also takes work.


Actually, these thoughts about work and bicycle riding have been rolling around in my head since Russia. Earlier this month, I joined a small band of Canadian bicycling advocates in Moscow for Winter Bike Congress 2018. It was too much fun. The closed-streets ride along the river to Red Square with my wife and thousands of others was revolutionary joy. But all of that is another story. 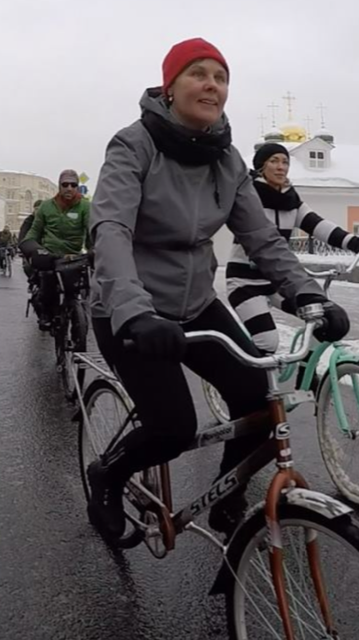 The last day of the conference featured awards handed out by the Winter Bike To Work Day organizers. Winter Bike To Work Day is an annual event to get people—especially in places where bicycling is still thought to simply be a summer recreational activity—to commit to ride their bicycle to work, in winter, one day a year. There is a friendly competition on the side, as participants register on behalf of their cities and cities go head to head for bragging rights. Novi Sad, the second largest city in Serbia, won the day with 1,393 registered riders. With 1,165 participants, Denver placed second. For the record, Edmonton finished 10th, and, with 218 winter riders who worked their way to work, was the top Canadian city. 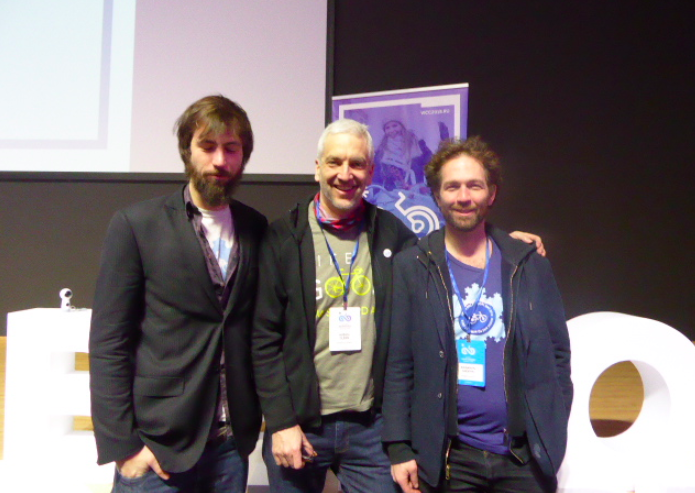 With Torrin (left) and Anders (right) of Winter Bike To Work Day.

Today, as I navigated my way on 20-psi tires back from the grocery store, I lost some of my grip on Winter Bike To Work. I mean: what work was that little word To doing? Was it a preposition indicating location; that is, the workplace? Or was it part of an infinitive verb, to work? Are we celebrating riding a bicycle, instead of an automobile, to one’s place of employment, or is the emphasis on the labour necessary to move a machine in order to be then moved by it?
I suggest we accept both readings. The first because it’s obviously true, and the second because it keeps open a path to another reason, whether in summer or winter, to ride a bicycle. We ride to where we are going. And we also ride to how we are going. Riding a bicycle imprints on us from a young age an egalitarian truth. The I doing the work is the I enjoying the freedom. Frick.

A practical guide for choosing when to ride a bike