We live in a world of bad bike racks. Poorly designed or haphazardly placed, bad bike racks do more than bring a tear to the soul of urban riders: They are a thief’s best friend, a repair shop’s dream, and are a blatant reminder to cyclists that society doesn’t care enough about them to simply provide a decent place to park.

It doesn’t have to be this way. A simple, functional, secure bike rack may be the easiest construct of our cities. Yet here, thanks to Shifter readers sharing their bike-rack horror stories, are the many ways we’ve screwed it up. Read it and weep (until the end, where some positive signs emerge).

(And this page may load slowly, thanks to all the awesome photos shared by readers. Please be patient).

The classic wheel-manglers: These offer the illusion of offering ample spaces for bikes, but they excel only at mangling front wheels. Also, because many bikes don’t even fit into those little slots, usually the first person to use the rack plants their bike sideways and takes up three-quarters of the rack. Sorry, second-comers, you’ll have to use that lamppost over yonder.

In fact, @itsakev offered an entire gallery of ways in which this type of rack sucks hard. Here are a few choice samples

The modern wheel-mangler: A new twist on the classic wheel-destroyer, this one gets points for the efficiency of pre-fab concrete, but big deductions for being designed by someone who has never realized the importance of an unbent wheel.

Too fat for locks: These have a nice steam-punk meets-Bauhaus look about them, but if the business side of the bike rack is nearly too wide to accommodate a U-lock, it’s a problem.

DIY disaster: I’m all for DIY, but usable racks are used for both parking and security. With nothing to lock to, this one fails at the second.

Half-and-half: These popular swirling racks, which you could call the endless W (but probably shouldn’t), are only half terrible. That’s the half where the little loop is too small to accommodate a wider wheel. The other half, where the loop opens up to any bike and even keeps them upright, is A-OK.

Older and worser: Sometimes, a bad rack ages and gets worse. Think of it like the opposite of fine wine. More like aged milk, perhaps.

The second part of terrible bike racks is poor placement. Sometimes a good rack put in a bad spot is worse than no rack at all.

Lonely racks: I suspect whomever paid for and placed this rack is quite pleased with themselves for accommodating cyclists, yet the placement of this wheel-mangler somehow elicits strange feelings of sadness and loneliness.

Proximity problem: We’ve already established that this style of rack is actually half-good, but when placed so close to a wall the bike doesn’t fit properly through it, the rack devolves to mostly terrible.

Onwards and upwards: These racks are pretty good, but not when placed on a step where the poor cyclist needs to heave the bike upwards and hope it doesn’t roll down while the lock is being afixed.

It is apparently usable.

Wallflowers: More good racks placed too close to a wall to make them fully usable, this one with the added indignity of being located in the middle of a bank ATM drive-through.

Bike-rack afterthoughts: It’s nice for businesses to think about their customers who arrive by bicycle, but finding a little hovel far from the front door, up a few steps, and too close to a wall to be usable is just plain annoying. As one commenter on this thread said: “There seems to be plenty of parking spots for vehicles but lacking in spots for bikes or trikes! . . . I’m getting sick of locking up to a tree or street sign post.”

Mixed messages: A good rack, placed beneath a sign that isn’t so much. 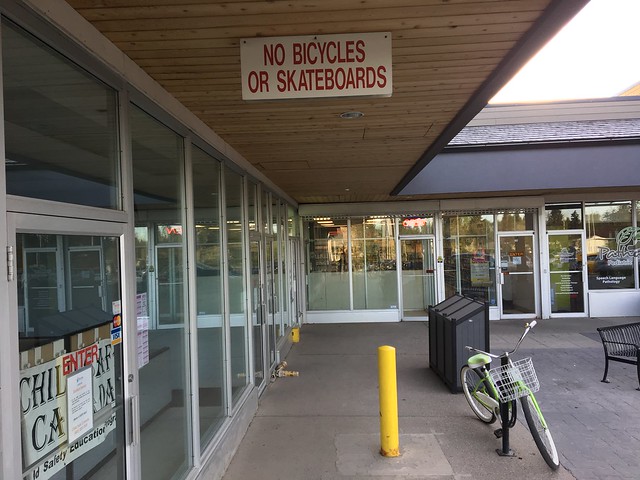 Nonexistent: If you ever see bikes locked to trees, parking meters, lampposts or, in this case, railings, it’s the ultimate bike-rack fail: not installing a rack at all. 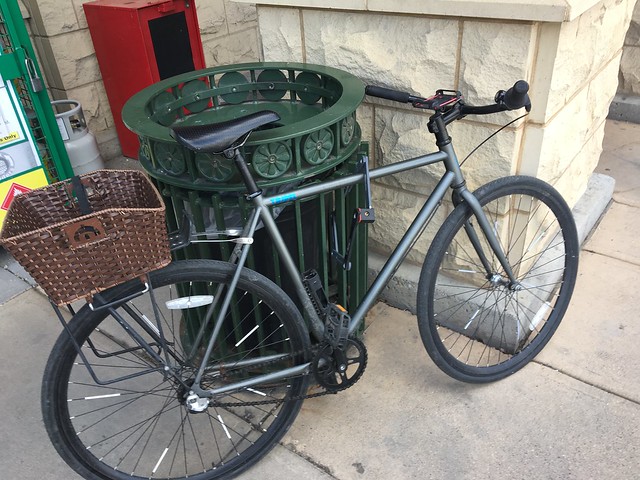 Lest anyone read this post and think that cyclists are a bunch of entitled crybabies who feel they are owed such things as reasonable parking spots, let’s give a shout-out to all those business owners and municipal planners who are doing bike-parking right. Kudos to you, thoughtful people: may the cyclists of the world shower upon you their hard-earned spending money and civic voting patterns.

Making space: This parking garage proves that removing just a few spaces for cars and installing a decent bike rack can be a boon for dozens of cyclists.

Simplicity works: See, this doesn’t have to be complicated! These simple racks can accommodate bikes on both sides, can fit many bikes into a small location, and are perfectly functional.

Beauty and functionality: Many cities have taken bike racks beyond function and are looking at them as pieces of public art. One of the first was musician David Byrne’s artistic racks in New York City, but many cities are following suit, and improving. Here are a few examples.

Thanks to everyone for sharing these photos. The purpose of this post is not to shame the guilty paraties. Bad bike racks can happen to good people. But if your business hasn’t put much thought into accommodating your customers on bike, perhaps it’s time to do so.

Here’s why people ride their bike to work