1. I like winter. I like the consciousness of it, how it demands attention. Everything else in our life is always being made more convenient. Not winter. Winter will not bow to your busyness.

2. I like being forced to slow down. In the summer, I always feel like I can never ride fast enough. In winter, whenever I go too fast, a patch of ice reminds me that, no matter where I’m going, arriving 30 seconds earlier will not improve my life meaningfully enough to accept the risk. 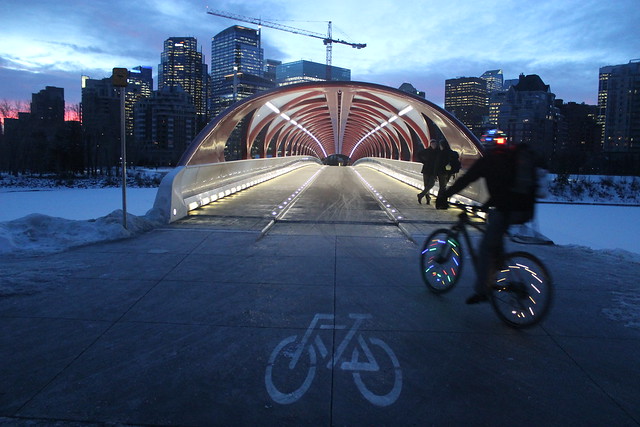 3. I remember being at a house party late one night during a particularly brutal cold snap. As we opened the door and the cold slapped our faces, I remember thinking that, if we had chosen the wrong jacket, or took a wrong turn somewhere, we might die on the way home that night. It somehow made me feel closer to everyone else at the party. But I had been drinking whisky for several hours, and everyone looked at me funny when I told them. We decided to walk home.

4. I like the getting dressed for a winter bike ride. Remember that scene in the Arnold Schwarzenegger film Commando, where he gears up to invade the island to rescue Alyssa Milano by applying black makeup to his biceps and jamming a knife into a scabbard? That’s how I feel, except with a toque I got for free from a hotel.

5. I like laying fresh tracks in snow. It feels like a base human instinct, something buried in the reptilian part of our brain. Sometimes I go out of my way to lay fresh tracks in snow, but it’s always worth it. Well, except when it makes me late for work.

6. On nights of fresh snowfall, street lights are reflected off the powder in a way that gives the city a warm orange glow. Snow muffles the sound. My pedalling keeps me warm, I can see my breath, and I cut fresh tracks in the powder. I love those moments, even with LED streetlights making the glow feel more blue than orange.

7. In the dark, which comes early in winter, it’s easier to see into the windows of the houses I pass. That sounds creepy, but I don’t mean it that way. Mostly, it’s just people watching TV. I like to see what they are watching. Usually, whatever they are watching makes me feel great because I’m outside enjoying my ride while they are indoors wasting their life. Unless they are watching Wipeout. Then I wish I was home watching it too.

8. The easiest part of winter cycling is staying warm. The hardest part is staying cool enough that you don’t sweat. Here’s where I go wrong: I worry about getting cold, so I dress in extra layers, which makes me too hot after I start pedalling, so I struggle to peel off layers and stuff them into my panniers without stopping because I don’t want to be late for work. Then, I arrive at work in a steaming T-shirt and a vow to stop overdressing. Repeat the next morning. Don’t be like me.

9. There was a time that I teased people who wore ski helmets while riding their bikes in the city. I thought they were being dramatic about the cold, and they looked ridiculous. Then, one morning, I tried it. I don’t tease them any more.

10. One of the great joys of bicycle commuting is passing lines of cars stopped in traffic. I admit it’s a smug kind of pleasure. This is even more satisfying in winter because the tailpipe exhaust adds dramatic tension to the scene.

11. When I first started riding a bike on city streets, I worried about taking the lane, which is an expression that means riding in the middle of the road instead of near the curb. In winter, the curb lane is often filled with snow, so taking the lane is sometimes required. For a long time, I didn’t like doing this because I felt guilty for slowing the cars behind me. I no longer have that guilt. I don’t know why, but I like it.

12. People think you must be stout and hardy to ride a bike in winter. You don’t. I try to tell them that, but they think I’m being modest and self-deprecating. After this happens several times, I’ll agree with them and sarcastically exaggerate how difficult it is. They usually don’t recognize it as sarcasm, and instead walk away feeling satisfied that their world view has been confirmed.

13. If somebody tells me they hate winter, I often ask why. Frequently, they say they hate winter driving. Some say they feel trapped indoors. Car commuting exacerbates both of these problems. Riding a bike fixes them.

14. Science says being outside is good for your brain and body, even if you don’t particularly enjoy that outdoor time on a windy and cold winter day. Riding a bike makes your life better, even if it’s sometimes hard.

15. I like how riding a bike in winter has changed my perspective on winter. Before I rode regularly, fresh snowfall and cold weather made me shudder. Now, I look forward to those days because it means the city will be prettier and the odds of a passing car throwing salty mud onto my face are reduced.

This is how you stage a winter bike party