I tried to find the best way to carry stuff on your bike commute. Here’s what I found

Getting to work on a bike is only half the job. The tough part is figuring out how to get all of your stuff there too. Your lunchbag, your coffee, your hand sanitizer (c’mon, it’s still Covid times), how do you carry it? I decided to test four of the most popular methods to determine the most efficient and simple. I tested:

Nice panniers, right? They were given to me to test by  @Vincita  — thanks to them. If you like the look of it, you can check it out here.

How many gears should you have on your urban bike? Three. Or maybe eight. But no more!

How athletic cyclists can ride for transportation

Finding my way on a bike through the COVID-19 lockdown

I, like most of you, have been stuck at home for weeks now because of the COVID-19 lockdown, and I’m glad to be doing my part to help stop this virus.

But it hasn’t been easy. Being stuck home for weeks, frankly, sucks. But thankfully, I’ve still got my bike, and I still live in a jurisdiction where health officials are encouraging its use, as long as it’s being done while keeping appropriate distance from others to prevent the spread of the virus.

But riding a bike through a city these days is completely different than in the past. Here are the ways in which I’m trying to find my way through this crazy situation. 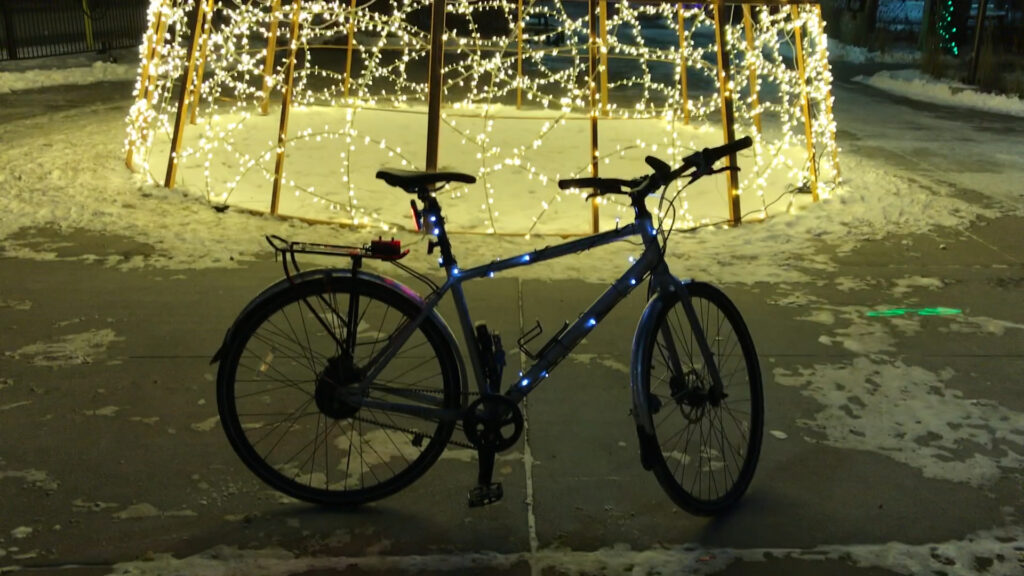 Decorating your bike for Christmas is fun, but can also help make you more visible.

I’ve always wanted to do this, but never quite got deep enough into Clark Griswold mode to get it done. But this is the year I decorate my bike with Christmas lights. This is mostly for fun, but being more visible on the roads during the dark winter months isn’t a bad thing!

Check out my video below to see how I did it (spoiler alert: It’s super easy!).

Testing the best ways to get around a city: Bike, e-bike and e-scooter

It’s an urban challenge we’ll all run into at some point: You need to get across the city quickly. What’s the best way?

To answer that, I decided to test three transportation options.

This isn’t only about speed. I’m also factoring in things such as costs and the all-important sweat factor. Any predictions?

My summer mission: Photographing utility-box art in my city

More than a decade ago, the City of Calgary commissioned artists to paint utility boxes. You’ve seen these nondescript grey things that electricity runs through, even if you’ve never consciously noticed them before. I hadn’t. They are part of the overlooked underpinnings of city infrastructure, like telephone poles or storm drains.

But dozens of artists have painted them in Calgary as part of this project, and, one day, while perusing the city’s open data site (I don’t have a lot of hobbies), I came across a list of the commissioned painted boxes and their locations. After a little spreadsheet work and some Google magic, voila, I had a map of every one of those 68 boxes.

This isn’t all of the painted boxes in the city. Apparently, the map hasn’t been updated in some time. But still, I kind of like these utility boxes. And I like maps. So I decided that I would make it my summer project to visit each of the points on this map on my bicycle and take a look at the art. And since I’m there, I’ll snap a photo and post it to Instagram, in a style inspired by Behind Handlebars. By the end of summer, hopefully, I’ll have a gallery of 68 artfully painted utility boxes.

Even as I type this I’m struggling to come up with an answer for the inevitable question that will follow: Why? Beats me. Ask me when I’m finished.

If you lead an empty life and want to follow along, Instagram is your best bet. And I’m taking a bit of time away from my usual blogging and vlogging this summer as a creative recharge, so this may be all you’ll get from me for a while. Enjoy your summer.

Why would a person on a bike choose a road over a pathway designed specifically for cycling? After being yelled at by a motorist for riding my bike on a road adjacent to a shared multiuse pathway, I decided to bicycle commute home using only pathways to show the good, the bad and the ugly about multiuse pathways.

The results show that the good and the bad about pathways. The good? For recreation, they can be fantastic: usually placed in beautiful places and rolling through parks, they are looping routes that allow for connections to nature and slow, easy rides perfect for hauling a picnic or visiting relatives.

For transportation? Not so much. They tend to be indirect, full of gaps, and rarely get you directly where you need to go. And as some followers have also pointed out, they tend to have slow speed limits and be full of pedestrians, both of which slow a commute.

Check out the video below for more.

You know what I’m talking about. It’s those bike lanes that are created just with a strip of paint and nothing else. No protection or separation from passing motors vehicles as all. Just a strip of paint.

The first came when I saw a talk recently by Dr. Jennifer Dill from Portland State University, who has done a ton of research into urban cycling. And one of the things she did recently was to survey people’s impressions of different types of bike infrastructure.

One of those question was to ask people if the presence of a different types of bike infrastructure made them more likely to ride a bike in a city. She asked about things like painted bike lanes, bike paths or protected bike lanes. And among the lowest results was painted hike lanes. People didn’t like them. They just don’t feel safe in them.

Which is interesting. Bike lanes are explicitly designed to accommodate cyclists, but most people perceive them as unsafe.

But maybe that’s just perception. Are they actually unsafe?

A different new study looked at this question. It looked at passing distance. Basically, the researchers hooked up a device to cyclists that measures the distance of passing vehicles. They sent those cyclists riding on different types of roads to see if drivers gave the cyclist more space when there was a bike lane.

What do you think happened? Yep, researchers found that motorists passed cyclists closest in two situations: Around parked cars, and in painted bike lanes.

I found this bizarre. Not only did people perceive painted bike lanes as among the most unsafe types of bike infrastructure, they are probably right.

So I did a little experiment and recorded one day of my bike commute. I then examined the video to see if this research bears out. Guess what? On just one day of commuting, I found that research is probably correct. The closest calls with cars came around parked cars and in painted bike lanes.

Which leads to a natural question: If painted bike lanes suck so bad, why do we build them? My theory? Because they are easy. Even though they do nothing to help cyclists, they are cheap, easy to implement and make cities feel like they are helping.

But it’s time to move on. Let’s drop the painted bike lanes in favour of infrastructure that actually works. Separate bikes from cars and people will ride bikes. It’s simple. Now, we just have to do it.