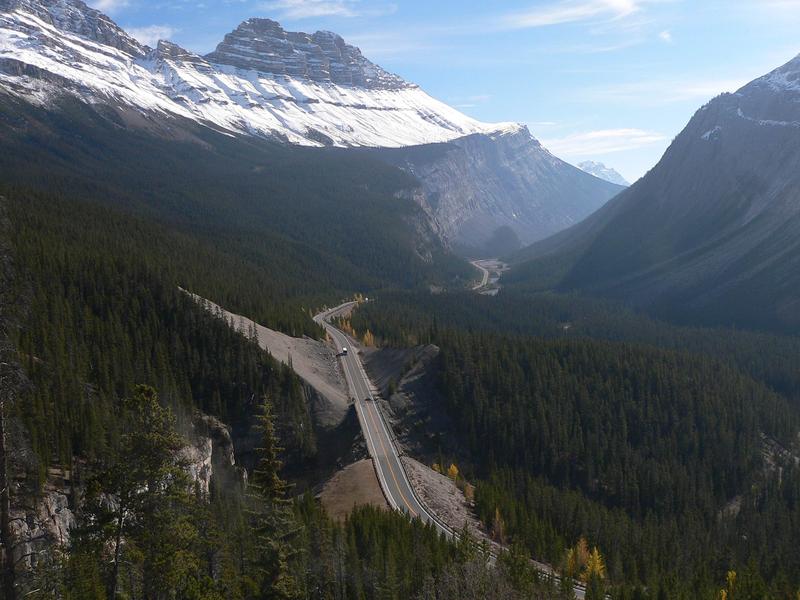 I will not forget the feeling of pedaling up Sunwapta Pass. Feeling was all there was. Pain feeling. And the feeling of being alone and in a test of will against that switchbacked ramp of asphalt and stone between Banff and Jasper, Aklberta. Out of gears now. And now just trying to keep a semblance of cadence. Passing automobiles heaved. I could hear them working from behind and then watched as they moved alongside and out of sight. Don’t look up! Look down. The vicious slope is not as obvious looking straight down. Look down, look down. So, I looked at cracks in the pavement and at wooden guardrail posts and shards of shiny glass. I watched tiny pieces of highway gravel inch backward as I pedaled ahead, knees straining, lungs stretching. Wheels turned like second hands. Eternal alpine grandeur surrounded me—and I watched gravel and glass go by. I measured my progress in bits of glass and gravel. My heart pounded. Legs turned. I breathed staccato: in-in-in-out. My Miyata 1000 kept going. The sun stared. For the climb, I had written an inspirational quote from Dylan on a recipe card and tucked it in the plastic coverlet on the handlebar pannier. But literature didn’t help. Magic did. I imagined there was a piece of rope knotted to my ribcage. The other end of the rope was at the top of the pass and someone up there was cranking a spool, slowly, gently collecting me up. I invented this mechanism out of thin air. And it worked. Because I eventually made it to beautifully level ground at the top—2,035 metres—and I felt the rope slacken. Euphoria. I had climbed a pass in the Rocky Mountains on my beloved bicycle. What looks large from a distance close up ain’t never that big! 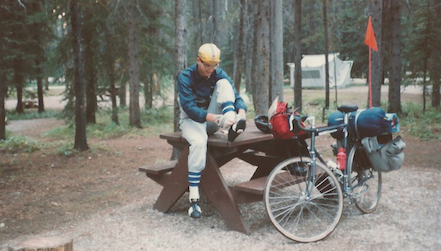 Me and my Miyata on that trip.

That was years ago when bicycle riding still meant high adventure. Those knees are over and they’re not coming back. I still ride my bike, but my trips are more humdrum. Recently, for instance, I pedaled from our house in west Edmonton to pick up chicken and fixings at a favourite restaurant on 124 St. I put those goodnesses in a cardboard box and secured the load to my mountain bike’s back rack  before popping back home down back lanes crevassed by spring thaw. No tow rope trick. No negotiation with existence.  The round trip took 46 minutes. I covered 12.4 km. And the ride included 58 metres in elevation gain. 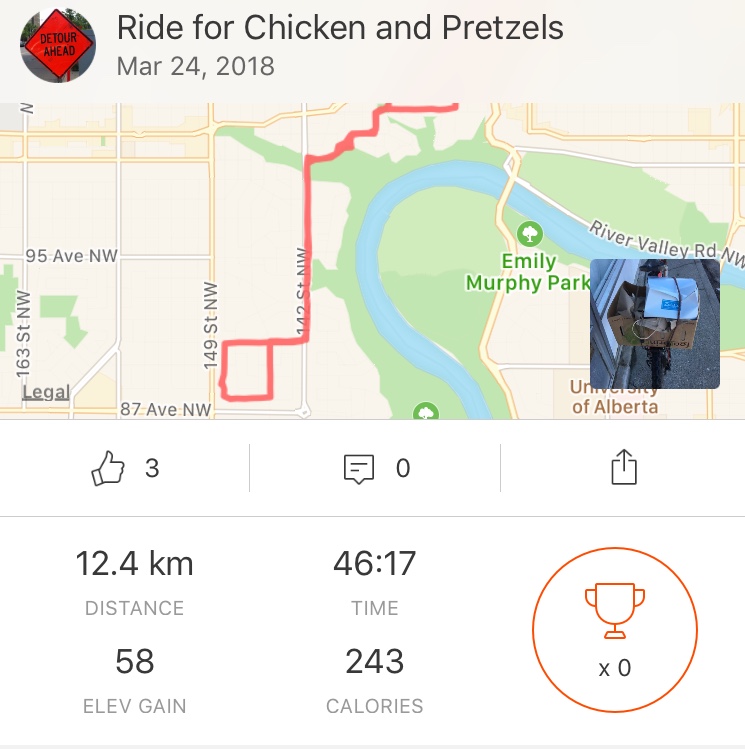 Legging it for chicken.

The humdrumstick ride data is from Strava. Full disclosure: I have a minor addiction to the app, even though I don’t use it in the mainstream manner. Strava, or sträva in Swedish, means strive. The app is aimed, by its own blurb account, at the full spectrum of athletes “from Olympians to weekend warriors.” Testimonials from runners and triathletes and bicycle racers get podium places on its website. The Strava app lets you get competitive any time you want, says one fan. My friends on the app are routinely laying down 100 km rides in the Calgary foothills or 60 km cross-country ski tours in the Gatineaus. Before work. These are strivers. They make great efforts, they fight, they battle, and they share their stats and personal bests and calories burned with the rest of us. 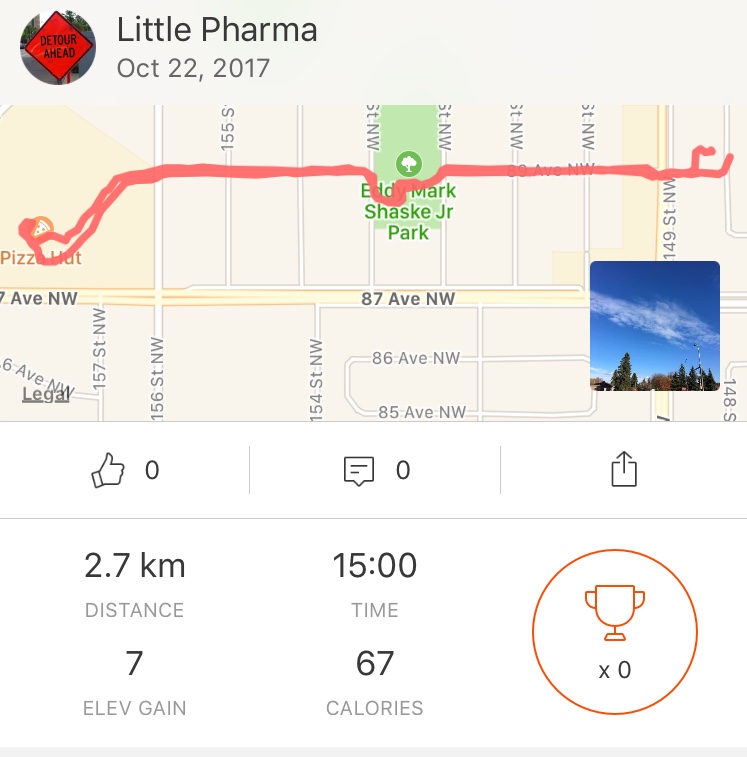 Here’s a modest proposal for the rest of us: let’s share our banal rides right back! The 1.3-km pedal to the drugstore. Put it on Strava. Call it Little Pharma. The 1.1-m trip to the grocery store for milk for coffee in the morning. Put it on Strava. Ride for Beans. The short trips to the bakery, the pub, the bookstore, the florist, the neighbourhood restaurant, the bike shop, pretzel shop, the chicken restaurant, wherever, let’s put them all on Strava, or on whatever other app records our little revolutions—those destinations between 1 km and 6 km away that are reasonable to get to on a bike, especially on the weekend. 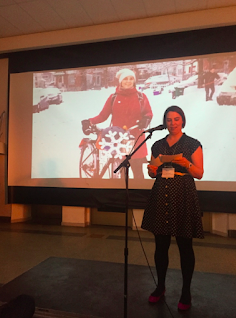 Lana, on the importance of those little rides outside your commute.

My friend Lana from Ottawa helped me see this route to stitching our bikes into our everyday lives. Riding a bicycle to work may be the bigger win, eventually bringing protected infrastructure with it, but riding a bicycle to work can be a lot of work, especially for the first-time, two-wheeled commuter. There are obstacles. Safety in traffic, changes of clothes, storage of machine, sweating of body, matting of hair, thefting of bicycle, mild ridicule, changes in weather, and so on. Bicycle commuters who have overcome these challenges risk appearing beguiling to others who see in clear sight where the obstacles lie. It’s also valuable, Lana reminded me, to encourage folks to pedal to locations that, if they’re fortunate, still sit within a few kilometres of home.

And to remember that advice myself. It’s healthy, reasonable, sensible advice. And it takes work.

It’s work because going from zero to something is just as difficult, if not more difficult, than going from something to something-plus-one. I accept that was not the language of proper physics. 🙂 Trying again: It can be work out of proportion to the distance travelled to ride a bike the few kilometres to get a prescription or a loaf of bread or 10 pieces of chicken. Once more: it is easier to pedal the few blocks for chicken if I am already the person who pedals to work. Or, again: what looks small from a distance (riding for errands) close up is actually quite big. Or, in conclusion: driving a car is pretty easy!  The real work of riding a bicycle for the mundane stuff of life is on the pre-pedaling side of pedaling. That’s where the little lazinesses lurk. That’s where the transportation status quo calcifies into place like a Latin cliche. Naming these challenges and surmounting them is the task at hand, and foot. 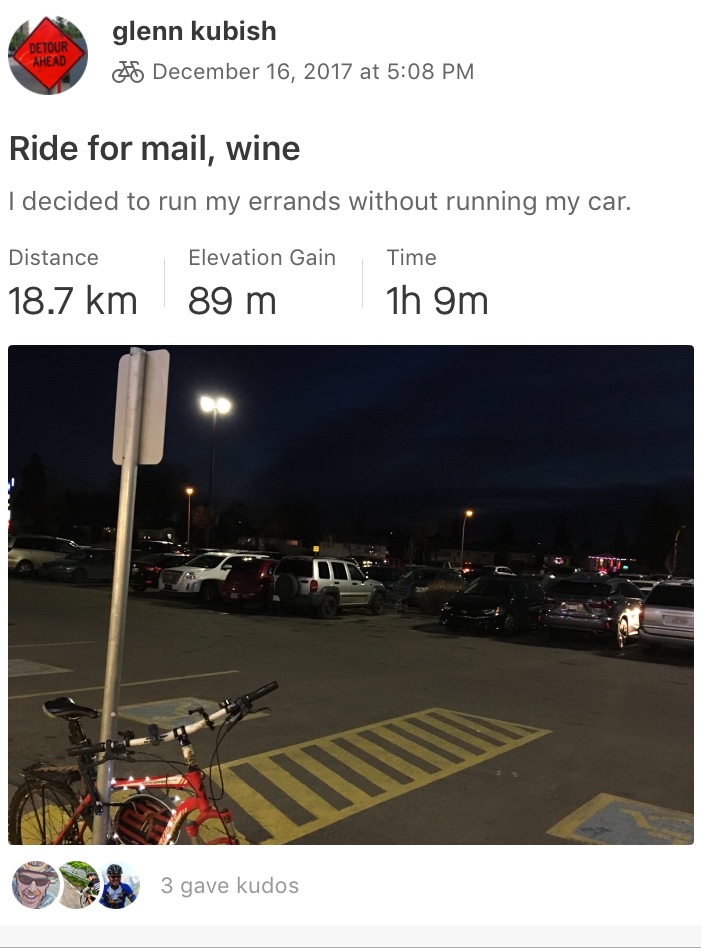 My friend Tim is a great bicycle rider. He commutes, he races. Last year he rode along gravel roads from Coleman in southern Alberta to Hinton, which was approximately 687.6 km farther than my ride to Northern Chicken. I Facebooked him this Big Pedal question:

“Compared to all your striving, what is the value of someone deciding not to take the car to the grocery store for a loaf of bread and eggs, but to ride a bike there instead?”

He replied with some poetry:

“The value comes from the same things on a short ride as long. The value is created by seeing what was not previously seen, hearing what could not otherwise be heard. Those moments may not come as often on a short ride over the same familiar roads, but they are there.”

Life being life, we all have more short rides than long ones. More groceries to get than Sunwapta Passes to climb. Choosing to make the many short trips on bicycle, or even one of them, is uphill work. It’s work worth doing–and worth telling Strava about.