Back in 2013, after seeing the Finnish city of Oulu for the first time, I wrote a post called Never Mind the Plows. The idea was to focus on things that can improve winter cycling beyond the basics. Any by basics, I meant plowing.

Well, five years later, as much of the winter world has seen the benefits of encouraging people to ride in winter, like they do in Oulu, it’s even more clear now that perhaps nothing is as important to the adoption of winter cycling than plain, boring, overlooked, unsexy, plows. (Or brushes. Or shovels. Or whatever gets rid of the snow efficiently).

In Calgary, where I live, the snow clearing of downtown bicycle lanes has been (much to the consternation of professional complainers) pretty great over the last few years. With an ever-expanding network of bike paths being cleared, the city’s efforts in winter have resulted in a growth in the number of people riding in winter that has kept pace with the growth of those riding in summer.

At the city’s Peace Bridge, one of the busiest bike spots in the city, for example, the growth in cyclists from 2014 to 2016 in the summer was about 27.2%, according to publicly available bike counts. In winter over the same period, that growth was 25.4%. The number of people riding in winter is obviously smaller (about 35% of summer numbers), but fact that that growth is consistent across seasons is some evidence, I’d argue, that clearing bike lanes works. It means there is growth potential in winter.

Just ask Montreal. This city, the most bike-friendly on the continent, in my humble opinion, has, for years, taken literally that old headline of mine. Rather than bike lanes free of snow, many of those routes were actually closed for winter. The traffic poles that separated bike lanes from car lanes were removed, and the space was given back to cars. For people who rely on bikes for transportation, this was a gigantic, demoralizing sigh, and it was reflected in a smaller proportion of people riding year-round.

But even in Montreal, where snow removal may be an even bigger political headache than it is elsewhere (and, make no mistake, it is everywhere), that idea is finally being rethought. More and more bike routes are being kept opened in winter, and the city has officially committed to making all bike routes accessible in winter eventually. City officials have even agreed to look at ways of keeping a crucial bike route across the St. Lawrence River open year-round, including exploring the possibility of in-ground heating to keep the route ice-free.

Talking about it, however, is the easy part. Doing it is hard. During a recent trip to Montreal, the city was digging out from a series of snowfalls compounded by an ice storm that left many streets and sidewalks slick as a skating pond. As news spread that city officials were vowing to keep more routes open in winter, cyclists took to Twitter to, ahem, politely advise them to figure out how to keep their current commitments before adding new ones. Indeed, news about opening the bridge in winter only came after years of pleas from cyclists and a protest campaign. 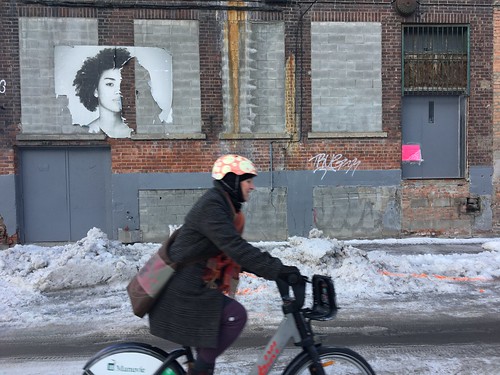 Those tweeters aren’t wrong. This city, so lovely to pedal through in summer, has some work ahead of it before it becomes just as good in the winter. It will be interesting to watch in the coming years how this new approach impacts the number of people riding.

But let’s face it: Keeping bike routes free of snow is tough. It takes commitment, ingenuity and, most importantly, money. It will never be easy, and it may always be a political hot button (hell, even after 80 years of plowing roads for cars, it’s still a hot button). But the upside is worth the investment and risk. Just ask the growing number of people who ride year round.