Timo Perälä, the Finnish visionary of the Winter Cycling Congress, has done more to spread the gospel of winter cycling around the world than perhaps any other person. But back in his home city of Oulu, he’s still experimenting with new ways of encouraging people to ride, despite living in what may already be the most bike-friendly winter city in the world.

One of the most efficient ways to do so, he thought, is to convert more summer cyclists into year-round cyclists. It’s the low-hanging fruit theory, and it makes sense. But how to do so? For starters, when he did some research, he found that men and women tend to report different reasons for stopping their riding in winter.

Perälä says most men tend to stop because they perceive winter cycling as too much work. “Most are being basically lazy,” he said recently, with typical Nordic bluntness. “Most of the time they just need some serious ass kicking.”

Women, however, report different feelings. They tend to avoid winter cycling because they are afraid of slipping and falling. Their safety is at stake. 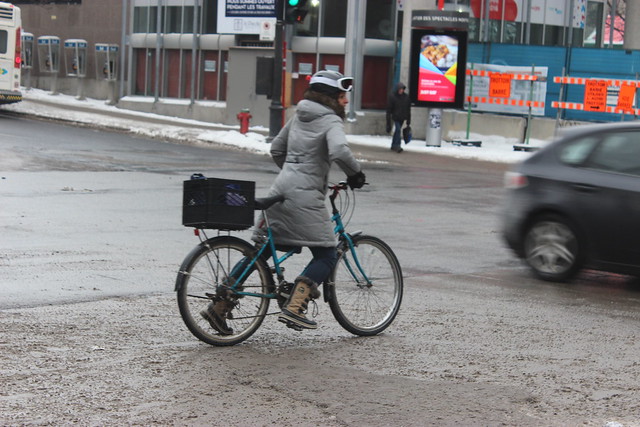 Knowing the best way to stay upright in snow and ice in cities is a simple studded bike tire, Perälä came up with a deceptively easy idea to get more women to try riding in winter: Just give them a studded tire. For free. For added confidence, he decided to throw in a helmet too.

With some funding, Perälä got a good bulk deal on tires and helmets and started giving them away to women interested in giving winter cycling a shot. The only catch? They had to promise to ride at least three times a week.

Since he started the program a few years ago, he’s developed a few additions to further incentivize participants, such as incorporating fitness tracking, creating a scorecard to keep them motivated, and developing several bike events through the winter to keep things fun. But the basics remain the same: Give tentative riders some equipment to make them feel confident.

He says the results are positive. Many participants become hooked and keep riding long after their commitment has been completed.

There’s a simple genius is this plan. Not only does it remove the fear of riding in winter, it also gets around the obstacle of cost, which can deter many people from investing in winter-bike gear. And knowing that people who choose to ride a bike for transportation in summer already understand the benefits, a little nudge like this can do wonders.

But for Perälä, something else was the most satisfying for him.

“For me, the best thing is that people really feel it was good for their health,” he said.