In Seattle, it was heralded as an urban paradigm shift. In China, it was cited as evidence of a declining national character. In Victoria, the capital of British Columbia, it felt positively genteel. 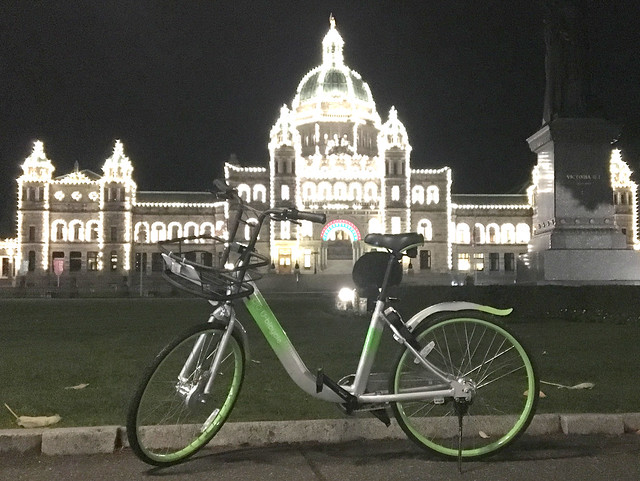 My Ubicycle in front of the B.C. Legislature building in Victoria. Photo by Tom Babin

I’m speaking of dockless bike-share systems, and after reading about them being implemented in cities all over the world, I finally got a chance to try one during a recent trip to Victoria.

Dockless bike-share systems are heralded as the next generation of bike sharing. Rather than being built around a network of docking stations, each bike is equipped with a smartphone-enabled lock and GPS device. The systems are as easy to use as car-sharing systems such as Car2go: Use the app to locate a bike, scan the bike’s QR code and it will unlock. Ride it to your heart’s content. When you’re done, lock it up and be on your merry way. The app charges you for the time you rode.

Victoria is the first city in Canada to catch this latest wave. Ubicycle is behind the city’s scheme, one of a handful of Chinese companies that have dropped tens of thousands of bikes into Chinese cities, and spent millions of dollars bringing such systems to North America, in ways that have not always been smooth (and sometimes disastrous). 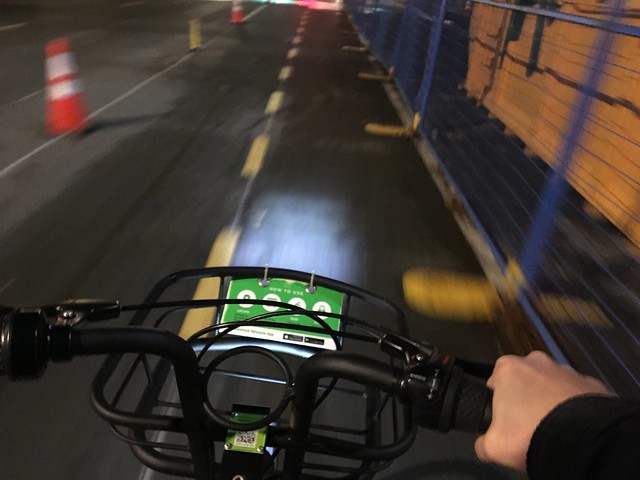 The first thing you have to know is a bit about Victoria. The capital of B.C. isn’t exactly Hangzhou. A government town of 85,000, the city is known for its British character, temperate climate and status in the retirement dreams of every snow-weary Canadian east of the Rockies. After a few days in the city, I’ll add a few modifiers: The city is as clean as a NASA lab, its rush hour is adorable, and it’s filled with cyclists taking advantage of a bunch of painted lanes, some beautiful pathways and two kilometres of buffered bike lane. With up to 25 per cent of commuters choosing bikes, the city is doing something right for cyclists. As far as cities go, it’s positively genteel.

The lime green Ubicicyle bikes are scattered throughout the downtown, parked on sidewalks and streets, secured by wheel locks. Victoria is filled with bike racks, but Ubicycles don’t need to be secured to a rack, which led me to observe perhaps the most Canadian thing ever: While those in other cities complain about dockless bikes being strewn about the streets in inconvenient locations, most of the Ubicycles I saw were parked beside existing bike racks. Not locked to the rack, mind you, just parked beside it, as if the previous rider didn’t want to offend any passersby by parking the bike in their path. Did I say the city feels genteel?

After exploring the city for a few days from the saddle of a Ubicycle (need I mention that a bike is the best way to explore a city?), I have a few observations to share:

Although it is perfectly legal to leave the bike in all kinds of places in downtown Victoria, I felt like a vandal for this waterfront sidewalk drop because most of the bikes I encountered had been neatly placed near bike racks by other, apparently more conscientious, users. Photo by Tom Babin.

One of the great advantages of dockless bike-share systems is their convenience. No more hunting for a docking station. You just park where you stop. Yes, this is an improvement. However, in cities with great bike-share systems, this isn’t really a problem. Montreal, for example, is so strewn with docking stations that finding one nearby is rarely a problem. The key for all systems is to ensure there enough bikes distributed through the city to meet demand at the right times. This often comes down to an old-fashioned idea: trucking bikes around and dropping them in the right spots. From my limited time in Victoria, distribution seemed just fine, but with some caveats. Read on.

In other cities that have failed to fully commit to a bike-share system, a lack of docking stations can be a death knell for the system. So too can a lack of bikes. So too can a lack of riders. Victoria’s system has only been in operation for a few weeks, so it’s probably too early to judge its success in this area. But I’d hardly say the streets are littered with bikes. In fact, I’d say, based on having to hoof it a few blocks to find a bike more than once, there’s a chance there are not enough bikes, albeit after the problems of too many bikes in other cities, perhaps this is a good starting point. Also, if ridership is a sign of a thriving system, I’d be worried about the health of the system. I have no data to back this up, but I used the same bike multiple times over two days and nobody else picked it up in the meantime.

There’s a big variance in cost across bike-sharing systems around the continent. One thing this new wave of dockless systems has going for it is affordability. The same holds true in Victoria. The price for a ride is absurdly low: $1 per half-hour. I ran an errand over lunch hour and the ride cost me less than 60 cents. I thought it was an error it was so low. Whether this low cost is sustainable over the long run will be interesting to see. But until then, just get out there and enjoy it.

One thing that can’t be ignored, considering the problems dockless systems have run into in China, is the way the bikes are being used. Bikes can be vandalized, strewn about haphazardly, parked in illegal locations and tossed into waterways. So far, this doesn’t seem to be a major problem in Victoria. There will always be such problems, but perhaps a small city known for its (sorry) genteel character in a country known for its politeness, a dockless system seems to be doing OK.

Ubicycle in Victoria seems to be working. As a tourist, it’s a fantastic way of getting around. The locals I spoke with saw it as a convenient and easy option, and wondered what all the fuss was about. It seemed to be working so well that the drama-loving side of me was a bit disappointed—where’s all the hand-wringing and endless debates about cycling? Yawn.

Because of its small size, Victoria may never have the thriving bike-share systems of New York, for example, but perhaps this will be the opportunity to test whether mid-sized cities can successfully operate a system. I, for one, can’t wait to get back and try it again.