Why would a person on a bike choose a road over a pathway designed specifically for cycling? After being yelled at by a motorist for riding my bike on a road adjacent to a shared multiuse pathway, I decided to bicycle commute home using only pathways to show the good, the bad and the ugly about multiuse pathways.

The results show that the good and the bad about pathways. The good? For recreation, they can be fantastic: usually placed in beautiful places and rolling through parks, they are looping routes that allow for connections to nature and slow, easy rides perfect for hauling a picnic or visiting relatives.

For transportation? Not so much. They tend to be indirect, full of gaps, and rarely get you directly where you need to go. And as some followers have also pointed out, they tend to have slow speed limits and be full of pedestrians, both of which slow a commute.

Check out the video below for more.

The bag of chips, inhumanely large, groaned under the strain when I heard the passerby say it: “Now that,” she said, “is the kind of bike you need for Costco.”

Mercifully, the bag didn’t explode and send a thousand kilograms of quinoa- and chia-infused tortilla skyward, but instead settled nicely into the saddle bags of my Xtracycle, which gave me a chance to collect my thoughts. “Yes, random passerby,” I thought. “This is exactly the kind of bike you need for a trip to Costco.”

This moment came about halfway into my recent urban cargo-bike experiment. After hearing about the benefits of cargo-bikes for years in Europe, I’m finally seeing more and more on North American streets these days. It’s easy to see why. They’re ultra-practical machines, capable of transporting all those loads of suburban life, from children to shopping bags. They’re the minivans of the bike world.

So I jumped at an offer from local bike shop BikeBike to give a cargo bike a whirl. But I didn’t just want a spin around the block. I needed a challenge; the ultimate test of the cargo bike as a modern suburban family vehicle, where I could test if a bicycle really can support our profligate North American consumerist lifestyles with the absurd conveniences we feel entitled to: Yep, a trip to Costco.

I convinced my 11-year-old son to tag along, both to bear witness and also help pick up the stray groceries that I imagined dropping from the bike as we rode home (I envisioned a slow-mo scene in which a barrel of cranberry juice dislodges itself and bounces down a hill before bursting into a tart tsumani that washes a school bus from the road), but since he was more keen to ride himself than suffer the indignity of watching his old man strain to push him up the hills, I turned down BikeBike’s offer a bakfiets. That’s a cargo-bike model you’ve probably seen in photos from Amsterdam, in which effortlessly sexy moms pedal kids sitting in a wooden box affixed to the front forks. Bikebike had such a model that came installed with a child seat that looked Lay-Z-Boy-esque in comfort, but I instead opted for an Xtracycle. On this model, most of the junk was in the trunk — a frame extension on the back could accommodate everything from straddling children to surfboards to, in my case, some massive panniers primed for bulk foodstuffs. 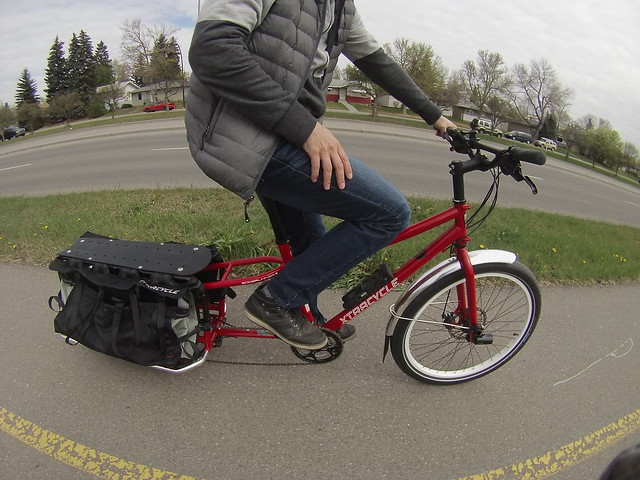 Off we went, on a crisp Saturday morning. The Xtracycle handled more smoothly than I expected. Once I got riding, it felt like any other bicycle, save a rather wide turning radius. It’s not the lightest frame in the world, but I barely noticed its girth or weight while riding. Especially when we managed to discover a multiuse pathway that took us from a quiet residential street past the gauntlet of a big-box retail district, right up to the entrance to the Costco parking lot.

Normally I enter such places on a bike the same way a young wildebeest crosses a crocodile-infested African river. Tentative and alert, I ride almost expecting a GMC Suburban to unexpectedly leap from the shallows and clamp its jaws around my tender rump. But riding the Xtracycle felt different. This was where its additional size finally came to mean something to me. I was the king of the road, bitches, and those GMC Suburbans bowed to me for a change.

Amazingly, this Costco had a well-placed bike rack that looked like it had actually been used before. So we locked our machines, flashed our card, and entered the Shangri-La of bulk retail, where the food samples are plentiful and everybody appears tired. 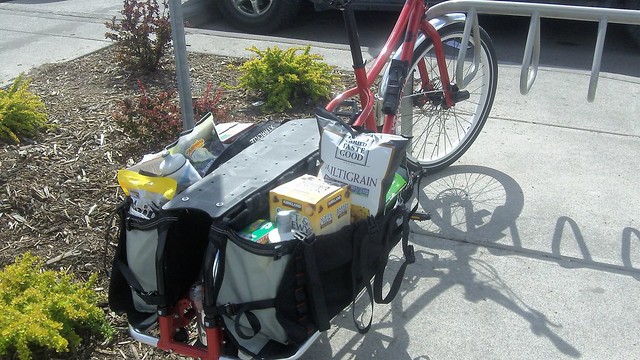 As far as test experiences go, we knew we had our limits. We wouldn’t be able to revel in an orgy of bulk groceries like we might had we been driving an F-150, but we pushed it as much as we dared. We loaded our cart with the staples on our list and a few giant bags of snacks packaged to make us think they are healthy, and got into the checkout line with hundreds of others who also didn’t want to be there. Before we left, though, we knew we had one more thing to do to make this an authentic Costco experience: I dropped $3 for two foot-long hot dogs, and we headed outside. 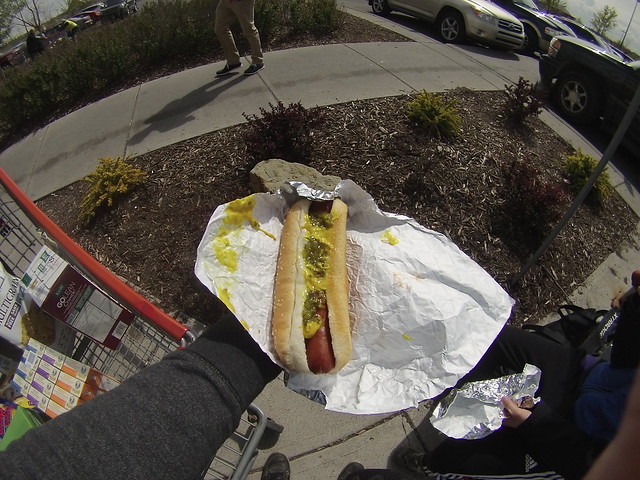 As the hot dog rumbled in my gut, I loaded the panniers with our haul. Months worth of granola bars, prepper’s sized boxes of pasta and those faux-healthy tortillas —  the bike bags opened wide and took everything we threw at them. A few people stopped to gawk, cargo bikes being rare in these parts apparently, but once I cinched up the panniers with the attached straps, we were good to go. 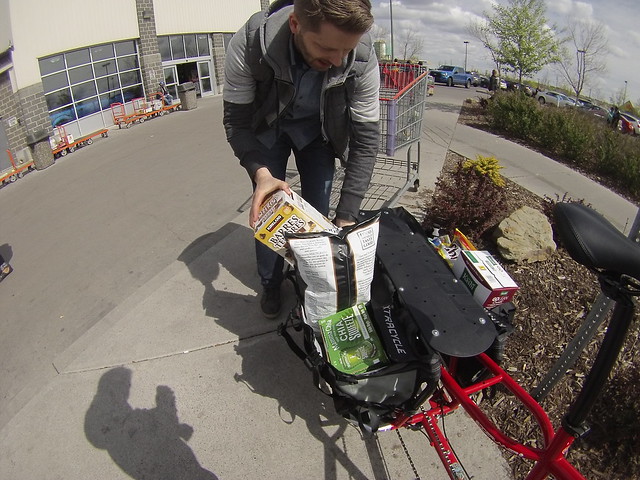 On the flat bits, the loaded cargo bike felt almost no different than it did before. But I dreaded the uphill, for good reason. This is where I started feeling the weight of all that food. So I quickly gave up any pride in a swift ascent and shifted down to the Xtracycle’s granny gear. With my legs spinning furiously, the hill proved little trouble. Before I knew it, we were cresting the rise near the Lamborghini dealership, where a few bored-by-the-recession salesman stared at us through the windows with dumbfounded looks on their faces. Try hauling this load with your $300,000 Italian engineering, bitches. 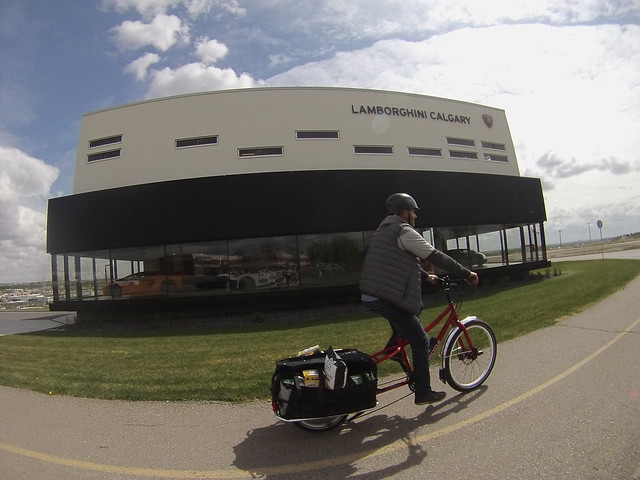 About halfway home, things were going so well I decided we might as well do another errand on our trip. This made perfect sense for my suburban family test — no self-respecting suburban mom has time to restrict herself to just one errand on a Saturday morning. So we would do the same.

I took a slight detour and pedalled toward the shop where my lawn mower was in for a sharpening. My mower isn’t exactly a John Deere — it’s a 15-year-old push model — but still, it’s a lawn mower. After a little rearranging, and the help of a few bungee cords, we had it strapped onto the bike. Off we went, my son expressing a mix of dubiousness and embarrassment at the load that was trailing behind me. 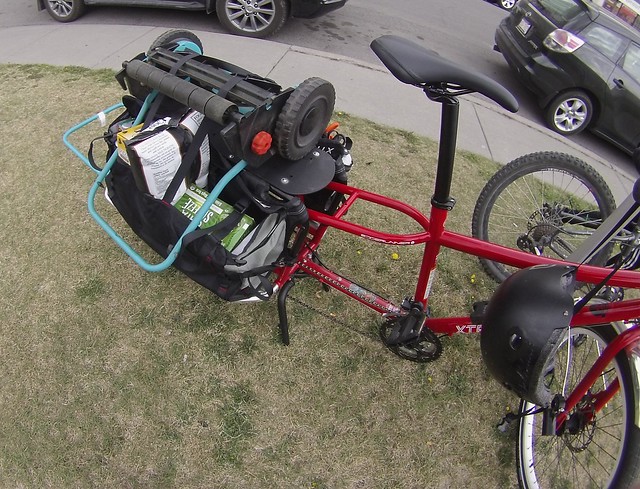 The Xtracycle, however, barely batted an eye. Loaded with groceries and a lawn mower, we turned toward home barely breaking a sweat (Ok, I sweated a little bit) where a neighbour, out gardening, stood and stared wordlessly as we rolled by.

As we unloaded, I felt a little pride in the Xtracycle. It passed this suburban test with barely a flinch, and I had grown a little attached to this big-hearted giant, in the same way you feel about Andre the Giant in The Princess Bride. Only later did I read that the bike is built to haul hundreds of pounds of gear — one person later told me he once used a cargo bike to move all of the furniture from his home — so our load, as impressive as it felt to us, was child’s play. 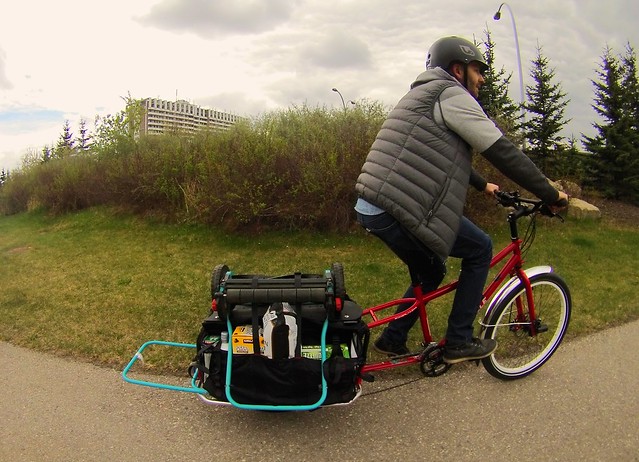 But hauling capacity isn’t everything. The experience did prove that cargo bikes can live up to their claims of convenience and versatility. I reluctantly returned the ride after the test, thinking about all kinds of things I could do if I had my own cargo bike. Next stop: Home Depot.