Sometimes, the person making your city better needs to be you 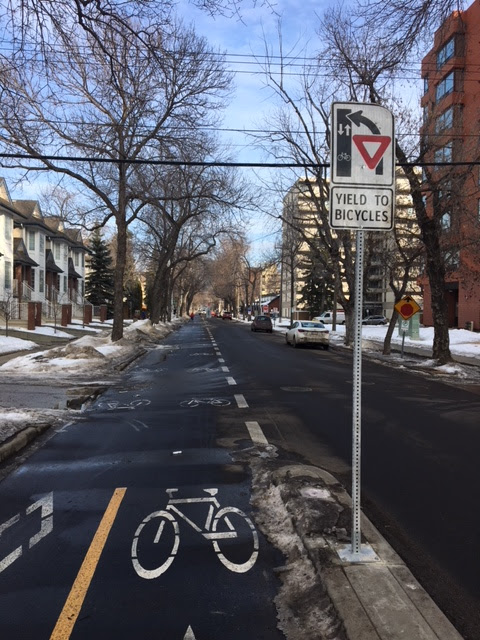 This afternoon there is again a Yield To Bicycles sign standing in its rightful place on the Oliverbahn, the stretch of mostly protected bicycle lane that runs along 102 Ave in Edmonton’s Oliver neighbourhood. The sign is now dog-eared, as if to mark a page that contains a lesson worth re-reading and thinking about. The sign is again doing what it was designed for, which is to remind motorists not to turn left into the path of bicycle riders like me. This is all very remarkable.

It is remarkable that Edmonton has a mostly protected bicycle path in the neighbourhood. Last year, there was no bike lane here. Riding east on 102 Ave toward downtown was a take-your-chances proposition for bike commuters who became skilled at threading the needle between parked cars on the curb and moving cars in the lane. It’s something, too, that the asphalt is clear in winter. This is because the City sends out pickups with calcium chloride sprayers onto the bike lanes before the morning commute. The brine makes it harder for ice to stick to the road. But what is most remarkable is the very fact of the sign’s re-appearance, and the work required to get it back in place. 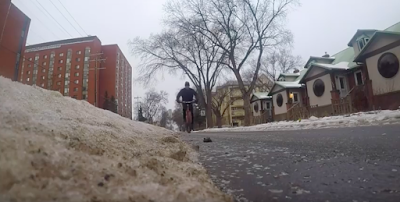 The Oliverbahn is my straight shot to work and back. It’s familiar.  I have gotten to know the giant elm trees along the route. I don’t live in the neighbourhood, but I recognize some of the people, the regulars, the dog walkers, especially. I say hello to the crossing guards. I watch the moms linger to watch their children in the school playground after they have said goodbye. I know where the air starts to smell like pot. Not like pot. Of pot. I know the stained glass windows of the United and Anglican churches, and I anticipate the slight rise and fall of the lane, the way it bends around the bus shelter at 122 St, and the bricks at the intersection on 121 St, I know them, too. Bicycle riders will recognize this kind of inventory taking. Riding at slow speeds without a windshield means we are allowed to experience more vividly than automobile drivers the material of the city.

For those two weeks, I didn’t stop, even though I heard a new voice every time I went by. The City should fix this, I said. The people who live here should get it fixed, I said. It should be fixed, I said. It’s a safety issue! Someone should report it to 311. I said to myself indignantly, Now why wouldn’t the automobile driver who clipped it take a minute to call it in? I even swore silently at the unknown offender. It was probably one of those giant garbage trucks, I thought. Yeah, that’s it. Those big trucks that look like armoured triceratopses. That musing triggered the song by Mark Knopfler with the line about the echoes, roars and dinosaurs. And then the sound of saxophone played my inner dialogue off the public stage as I whistled my way back to thoughts of meetings today and the need to try to get to sleep earlier tonight.

Bicycle riders know, too, when stuff is out of place. I first spotted the downed Yield To Bicycles sign two weeks ago as I pedalled by. There it was, lying on its back on the boulevard snow bed, looking a bit tired and beaten, staring straight up. It stayed like that for days. I would glance at it going by in the morning, and then again going by in the evening. Other bicycle riders must have done the same. One morning it lay there under the fresh linen of overnight snow, its frame still recognizable, but barely. 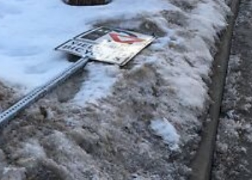 As the days passed and the sign settled in, I even got a bit creative with my rationalizations for not stopping. My selfishness could be recast as a law: A downed sign will stay at rest and a bicycle commuter in motion stays in motion at the same speed and in the same direction, to work in the morning and home in the evening, unless acted upon by an unbalanced force. Cute.

One snowy, foggy morning, I finally stopped, briefly. The sign was being slowly buried. I leaned over my bike and dug a gloved hand into the snow and found the sign pole. I lifted it up and shook it to get the snow off. I laid it back on top of the snowbank. Someone will see it.

I started pedalling again to work.

A few blocks later, I watched as a bicycle rider ahead on the Oliverbahn approached from the opposite direction. As bike riders do, we waved hello as we passed. It looked like Wendell, I thought. No, maybe not. I looked back, but his bike was already getting smaller in the mist. Wendell was an acquaintance for awhile, maybe, what, 30 years ago? He taught me to stand up for myself. Time flies, I thought. I resolved to Facebook him. I kept riding, but felt different, unsettled.

The next morning I did stop. Why did it feel like work to stop? I took a picture of the downed sign uploaded it to the City’s 311 app. 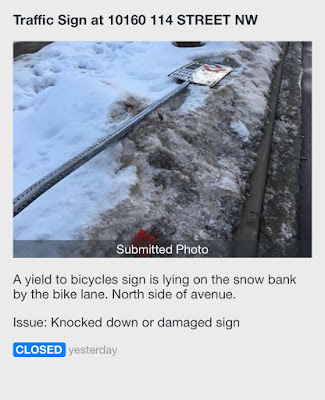 The next day, a traffic pylon appeared where the base of the sign had been sheared off. 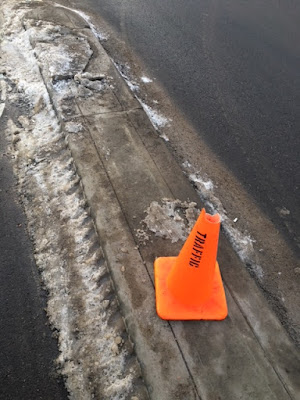 The following day, the sign was back in place, newly secured in the concrete median with fresh bolts and plate. 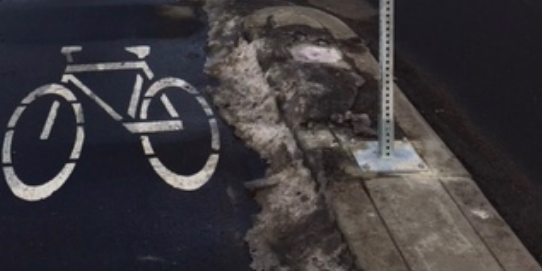 I had been introduced to Wendell in university. We seemed to be attracted to the same small protests. The power of multinational corporations, the security of food supply, those kinds of issues. He would say intriguing things like you don’t always protest because you expect to win the day. Sometimes you put a sign in the air when you realize you would be damaged by the act of waiting for others to do so first.