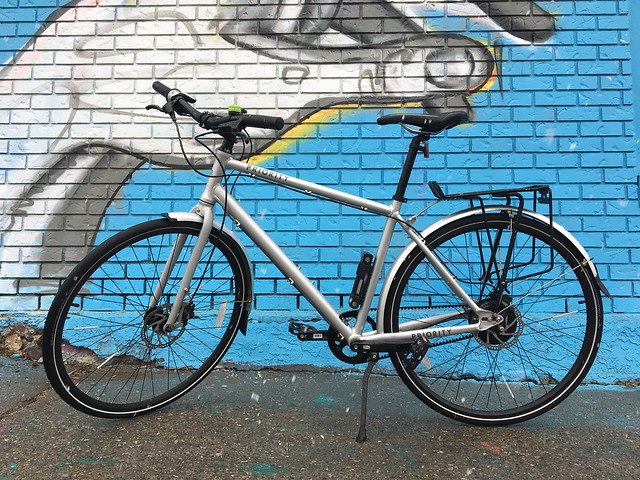 The Priority Continuum, the perfect winter bike for my commute?

For years, I’ve ridden the same winter commuting bike, which I affectionately, but sometimes derisively, refer to as my p.o.s.: a crappy 20-year-old mountain bike whose best days were in the last century. 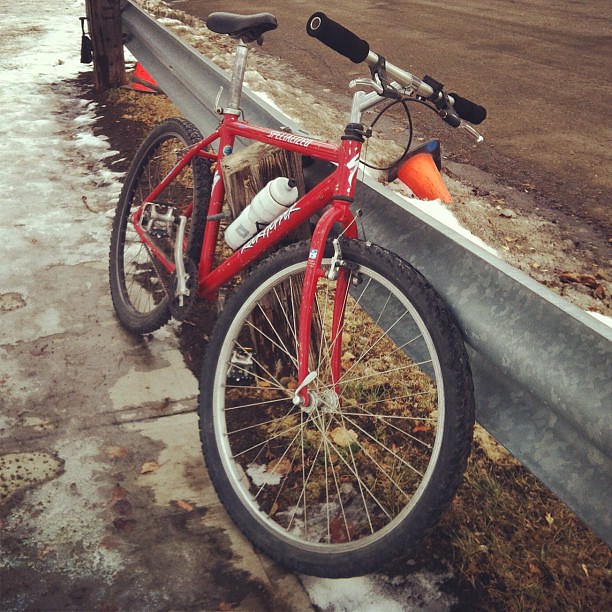 I converted this 20-year-old Specialized to a single-speed in an attempt to avoid rust.

While I do have a soft spot in my heart for this bike, that spot often grows hard. The machine is an entirely practical choice: after the salty slush of my commute destroyed an older, beloved bike, I turned to this one begrudgingly. With minimal components and a frequently replaced chain, it does the job. It also, however, clicks when I pedal, has untrustworthy brakes, can’t take a bike rack, lacks the components for proper fenders, and often rides like it has a deflated soul.

Which leaves me wondering why I have never seen a bike specially made for winter commutes. I know what I would like: aluminum frame to resist rust, good fenders, a strong rack for waterproof panniers, disk brakes that work in the cold, internal gear hubs that keep out moisture, studded tires, and either a belt drive or some kind of chain guard to keep the drivetrain clean and dry. All at a price reasonable enough to remain practical. In other words: a practical, low-maintenance, affordable, rust-resistant bike. That bike may exist somewhere in the world, but it always felt as accessible as a mermaid.

I’ve long felt like this was a failure of the bike industry. Obsessed with selling high-end performance bikes, the fact that a winter commuter wasn’t readily available seemed like another miss by an industry that is only starting to catch on to the idea of bikes as a form of urban transportation.

But then, my own busty fish-damsel emerged from the sea in the form of a smiling dude named David standing in the lobby of a bike-industry event beside a rather plain looking bike. Something about that machine caught my eye, and I went in for a closer look. My heart skipped a beat. My knees weakened. Was this my dream winter bike? 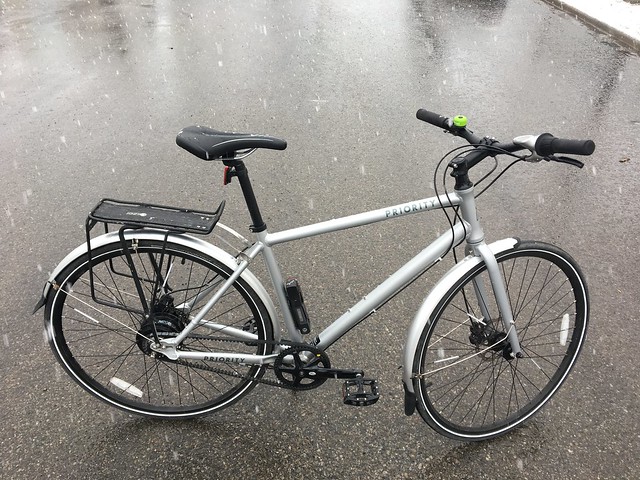 My mermaid was David Weiner, founder of Priority Bicycles, a New York-based online retailer that specializes in practical, low-stress urban bikes. And he was hawking the Continuum under the idea that it was a four-season commuter bike. While I was skeptical at first, I quickly found the machine was like the Millennium Falcon in that she may not look like much, but she’s got it where it counts: 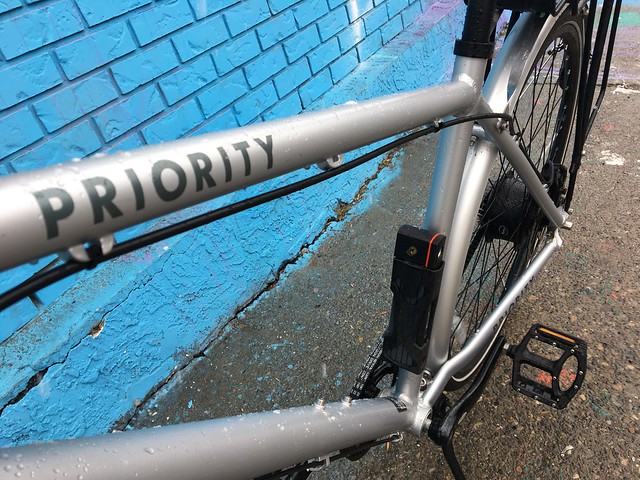 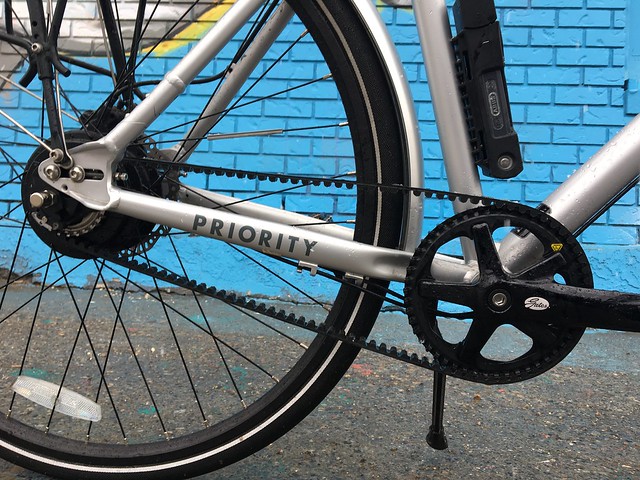 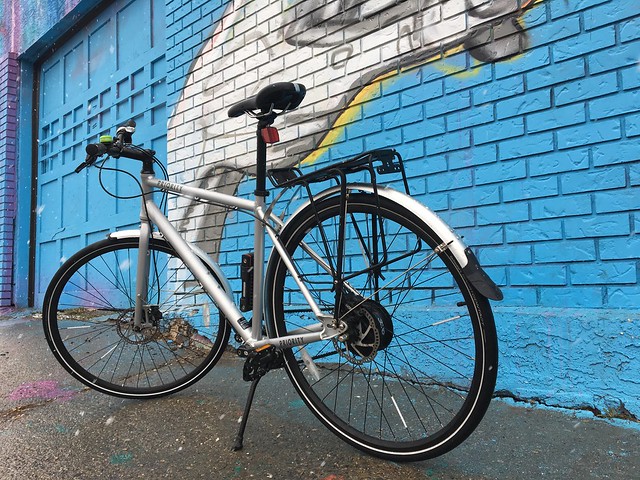 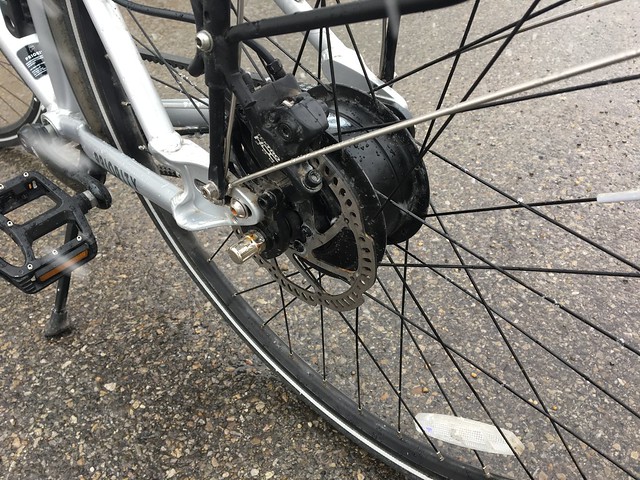 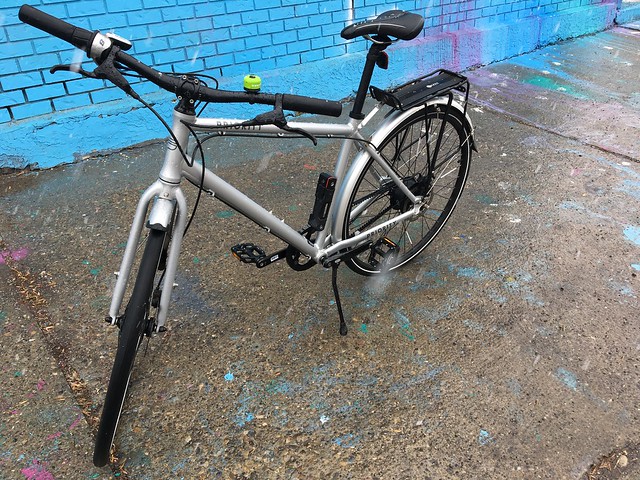 Twist shifter (for use with warm mittens)? Check.

In fact, Weiner told me the Continuum was built specifically with year-round commuters in mind.

“Simply, I wanted to build bikes that my friends could ride year round without worrying about maintenance, and at an affordable price,” Weiner told me via email. “When we launched the EIGHT last year we were surprised with how well it sold in the winter season and how many customers were coming to us telling us that it was their winter commuter of choice. This of course made sense due to the rust/grease-free drivetrain.

“However, one complaint we had was that the hub could freeze in extreme temperatures.  We started to think that there must be a better solution… Hence we worked on upgrading the EIGHT with a NuVinci hub (ideal for sub-freezing weather and the ultimate in no maintenance) and some incredibly durable fenders.”

I was convinced. I pulled out my credit card and my order was placed within the week. A few days later, a big box arrived containing the first new bike I’ve ever purchased exclusively for use in winter. Just in time for a cold snap.

As far as cyclists go, I’m not much of a gear-head. While I perform basic bike maintenance myself, one of my ultimate goals in a winter commuter is to reduce maintenance. My big enemy in this fight has always been rust. In my icy, slushy city, salt is my Moriarty. And simply hosing off a bike after a commute is not an option in a city where hoses quickly freeze and stay frozen.

So riding my Continuum through the tail end of a Canadian winter has been a test. We’ve had a few bitingly cold days, a bit of late-season snow, and a whole lot of slush, ice and salt as we lurch into spring and the snow melts.

As you can see, rust can be relentless. It’s already hit some components. 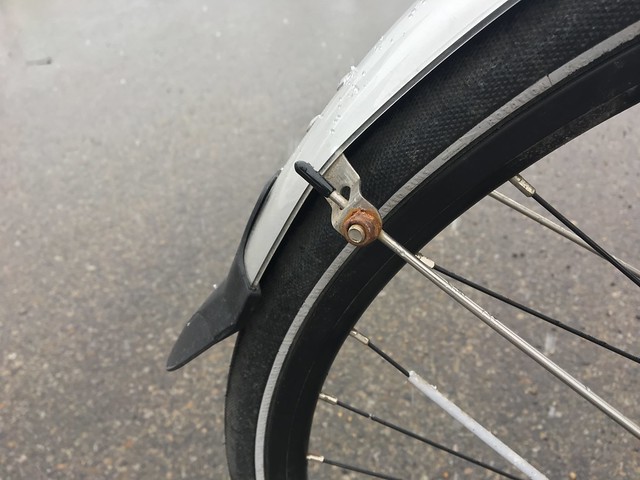 Rust is already gathering on some parts of the bike, after only a few weeks of use.

But on the important parts, the Continuum is riding smooth and rust-free. The best part? I have spent almost no time thinking about the bike. I’m not worried about the chain, or the brakes or anything else. It just works. 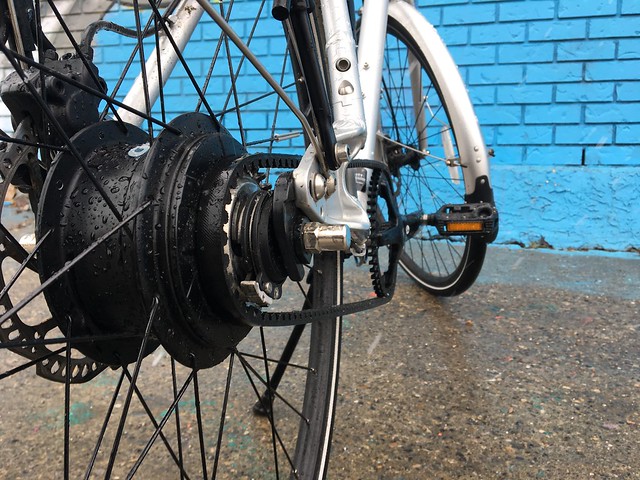 The drive-train, thanks to the belt-drive and internal gears, is free of rust.

Is this the ultimate winter bike? I’m not quite ready to declare that (ask me in the middle of next February), but it’s been holding up very well for me. The NuVinci hub has withstood the cold, the belt drive has stayed smooth in the ice and snow, and the fenders have been keeping my ass dry.

I’m not yet ready to give up my old mantra that the ultimate winter bike is the one that works for you. But perhaps what’s more important is that the bike industry is finally coming around to the idea that people are riding bikes all year round in cities. Thanks Priority. It’s about time.