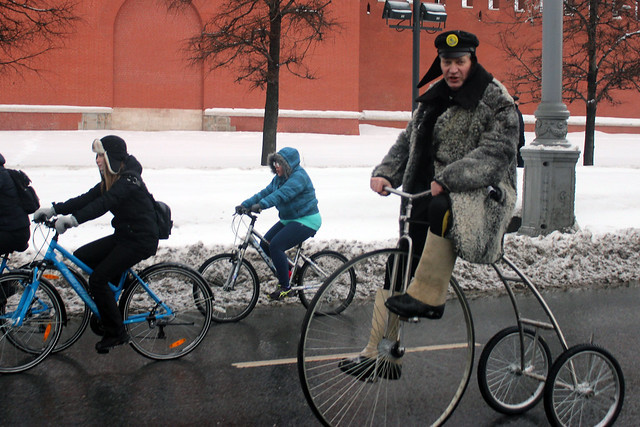 One of the participants of the annual Moscow Winter Bike Parade. Photo by Tom Babin.

It was the Russian dude in full furs riding a replica penny-farthing (kopeck-farthing?) that did it for me. When I saw this guy roll by the famous St. Basil’s Cathedral in Moscow’s Red Square yelling shout-outs to hundreds of fellow cyclists around him, I knew this wasn’t the city I once thought it was.

That moment came midway through the third annual Moscow Winter Bike Parade, a rolling party through the streets surrounding the Kremlin that attracted more than 4,000 people dressed for the weather and a good time. It was one of the most fun group rides I’ve ever been on – so fun it nearly obliterated my image of the city as a haven for gigantic multi-lane ring roads clogged with endless rows of barely moving automobiles.

I chose the word “nearly” deliberately. For as awesome as the bike parade was, one can’t leave Moscow without aggressively piloted cars as one of the city’s defining images. It’s a megalopolis built on the automobile, and when not part of a group ride, using a bicycle to get around the city feels about as safe as being a Cold War-era spy. 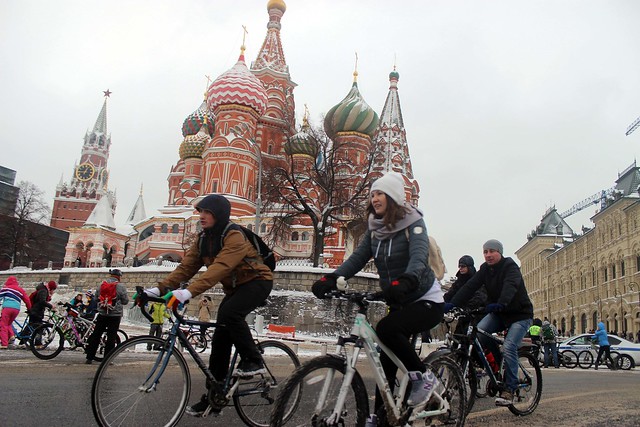 (I will, however, spare a moment to gush about the city’s metro system: wide, efficient, affordable, well-planned and spotted with beautifully built stations, the system moves up to nine-million people a day. If you can’t get your head around that, just imagine standing at a station as packed 12-car trains empty out every 90 seconds).

But I was in Moscow as an invited speaker at the Winter Cycling Congress, and if any place can highlight the green shoots of a more bikeable city, the conference centre was the place. Guided by the team at Let’s bike it!, aMoscow-based group that advocates for more people-oriented street design, I was given a tour of what could be the start of something big.

In the last couple of years, city officials (with nudges from such groups as Let’s bike it!), have started to look more seriously at improving the plight of pedestrians and cyclists as a way of easing its horrific congestion problems. A handful of separated bike lanes have been built recently. A bike-share system now operates through the summer months. Pedestrian streets have been improved. Even the new national traffic laws have been adjusted to make it easier to build pedestrian and cycling infrastructure, according to Nikolai Asaul, the deputy minister of transport. “(Cycling) is not safe enough, and comfort is not a priority,” he told the Congress. “For us, it’s a revolution in the minds of our urban planners.” You’d be hard-pressed to find a North American national politician supporting cycling so strongly.

I was also impressed with the winter hardiness of Muscovites (although I felt a little perverse pride in being one of the few people who visits Moscow to warm up). Having a positive relationship with winter is a key part of the best winter-bike cities, and Moscow has this in spades. The city was filled with outdoor winter festivals, light displays, and thousands of people on the streets dressed to enjoy the day, no matter the weather.

In the wake of the winter bike parade, I found it easy to get swept up in the optimism of the moment, but the reality is that Moscow faces some big challenges if it is serious about improving the city’s livability through cycling. And those go beyond the usual urban challenges of space, design and street culture. 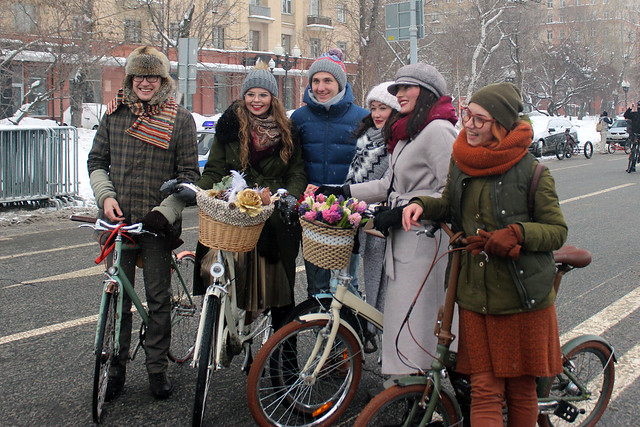 Russia’s political culture has not traditionally been built on grassroots involvement, so those passionate young bike advocates from all over Russia who attended the Winter Cycling Congress face an additional challenge of building a culture of engagement between citizens and municipal officials. While nearly every Russian I spoke with expressed optimism that Russian officials are increasingly open to the idea of active transportation, this kind of political/cultural change is never easy.

I was also heartened by the interest in winter cycling by Muscovites. The conference was crawling with media, and drawing 4,000 people out for a bike ride on a -10 C day in the snow is not easy, even in cities with more of a bike culture. This has not gone unnoticed by Let’s Bike It organizers.

“If you go out in Moscow, you’ll see how many problems we have, and we want to show the government and the people in Russia how we can change it,” I was told by Vladimir Kumov, the founder of Let’s Bike It. “Eight years ago when I started Let’s Bike It, Moscow was a car city. Traffic jams, and no space for pedestrians and cyclists. In the last five or six years, it’s started to change.”

And if you ask the dude in fur on the penny-farthing, he’d probably agree.

A practical guide for choosing when to ride a bike