For all the work that goes into making streets safer and more welcoming for cyclists, consider perhaps the greatest and most under-appreciated tool of this transition: The ubiquitous camera.

Street photography is nothing new, of course. From Henri Cartier-Bresson to Robert Frank, impromptu moments from city life have always been at the forefront of photographic art.

You could even argue the first photograph ever taken of people was street photography. 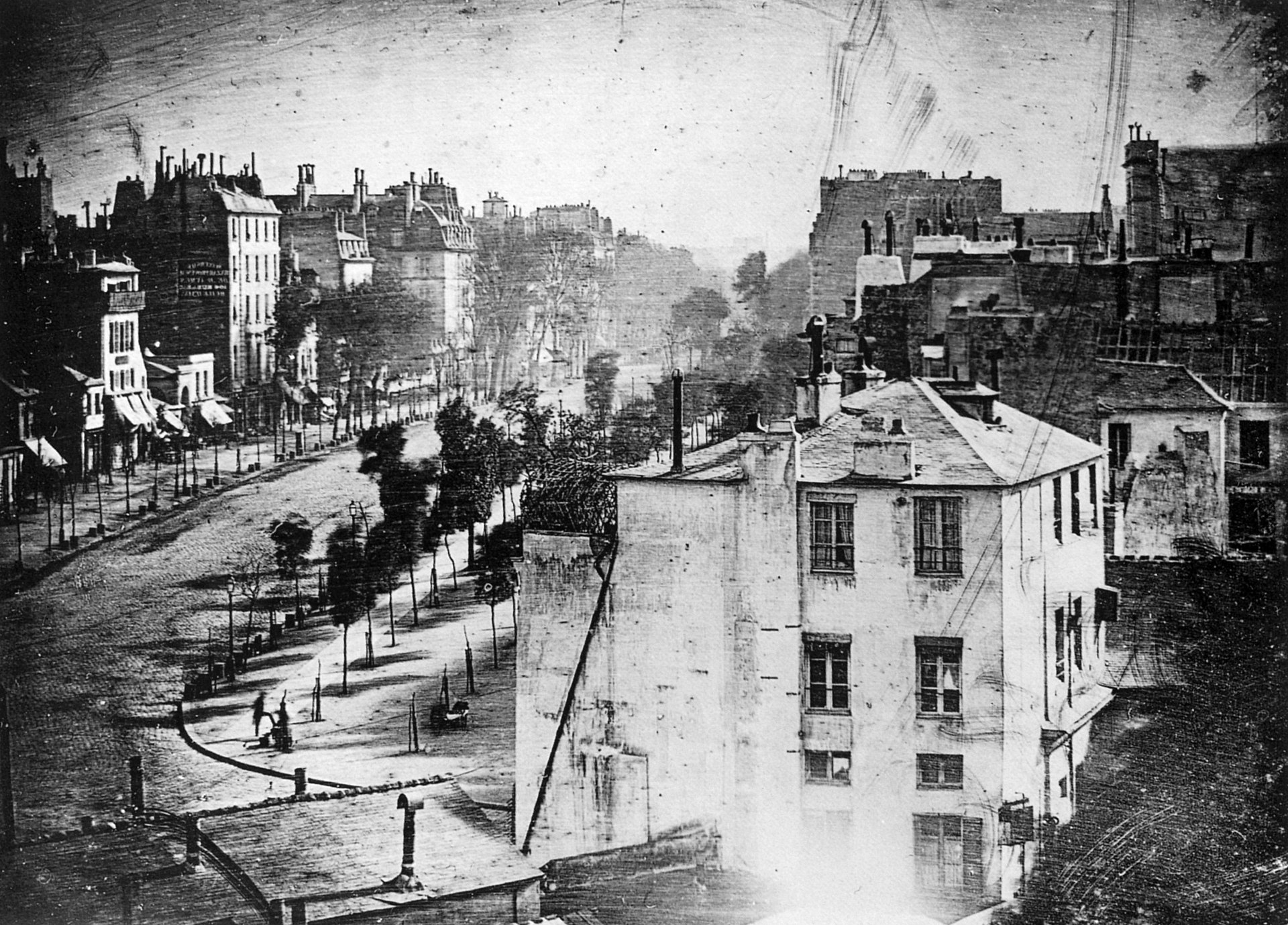 “Boulevard du Temple,” a daguerreotype made by Louis Daguerre in 1838, one of the world’s first photographs to include people.

That influence has only grown in recent years, from blogging (the Sartorialist) and then social media (Humans of New York, everything on Instagram that isn’t food). And thanks to that little computer in your purse that happens to have a camera lens attached to it, sdtreet photography these days transcends even its own medium and helps define the esthetic of cities.

That’s why it’s evolved into such a powerful tool for urban cycling. Consider Mikael Colville-Andersen’s Copenhagen Cycle Chic, which spawned imitators all over the world.

Cool photos, right? But because these photos involve bicycles, and everything about bicycles these days is political, this type of photography is inherently political.

In Toronto, during 2011 and 2012, photographer Lincoln Clarkes captured dozens of images that became Cyclists, a book of photography of people on two wheels, most of them looking sexily non-plussed despite the hostile environment surrounding them at the time. While not overtly so, the politics of these photographs is obvious considering Clarkes shot them at the height of late mayor Rob Ford’s anti-bike backlash, when the ever-thoughtful mayor compared riding a bike in Toronto to swimming with sharks.

A shot from Lincoln Clarkes’s Cyclists.

In the book’s forward, Clarkes is quoted saying the photographs serve as “sexed-up, environmentalistic, fashionesque portraiture, which is a subtle protest against the petro-chemical and automobile industries.”

Here in Calgary,  a bike-loving man named Peter Oliver has started a formal project to harness the political power of bicycle street photography. He’s part of a group that rallied support for the adoption of a pilot project of downtown bike lanes last year, and now he’s hoping to solidify that support by giving people a glimpse into exactly what those bike lanes have wrought: People on bikes.

Oliver hopes showcasing photographs of everyday cyclists in Instagram will help dispel the notion that all cyclists are latte-sipping hipsters or angry Lyca-clad suburban commuters blowing through red lights (or sometimes both).

"Our perfect afternoon for our family is just as easy as popping on our bicycles and travelling the cycle tracks to get to one of Calgary's amazing inner city parks or playgrounds and cafes. While the destination is certainly important–we love St. Patrick's Island and East Village–the journey is an important part of our afternoon. Safely riding our bikes from our home to a great public amenity is a highlight for all of us, especially our little girl who loves riding up front on our bikes. Plus, when you're biking, it's so much easier to stop along the way to explore something or shop somewhere. Every family ride is an adventure." #YYC #yycbike Photo by @brycemeyer

“I really want to get down to people on the street, and show the diversity of people who ride bikes,” Oliver told me over a beer recently. “I want to break down the stereotypes about who cyclists are, and show that’s it’s just ordinary people doing what they do. It’s just part of their life.”

"We can make Calgary an even better city by allowing ourselves to actively connect with it and one another. Take off our headphones, enjoy public spaces, participate in events and recognize that sharing our environment with one another is one of the best things that living in a city has to offer. Find the people in your world that volunteer – they’re our best ambassadors. I’m grateful for the opportunities that volunteering has brought me and how much more connected I am as a result to my community and the city as a whole." #yyc #yycbike Photo by @brycemeyer

Bryce Meyer, a top editorial photographer, jumped at the chance to be the first contributor to People On Bikes YYC. Meyer, a former competitive road cyclist who ended his itinerant career in his early 20s after being robbed at gunpoint while training in Arizona, says the project is less about the politics or fashion for him, and more of a passion project. He loves everything to do with cycling, and he thought this was a way to give back to a cause he cares about while indulging himself (the fact that he’s managed to learn how to shoot photos while riding his own bike certainly helps — “Forget the viewfinder,” he advises. “Trust the shutter.”)

Q: Where do you take visitors in Calgary? A: I love hosting visitors in #yyc! Since I have a few extra bikes, I will often take my visitor on a bike tour of my favourite places. We ride along the Bow River pathway system, over the peace bridge, stop for a coffee in the East Village at the Simmons Building, head downtown and view Neverland then visit the Calgary Tower for an observation deck view. Next I take my guests for an Ice Cream in Victoria Park, we ride the cycle track back a bit and we stop for a patio drink on 17th Ave. It's the perfect afternoon and I always enjoy the trip as much as my visitors. #yyc #yycbike Photo by @brycemeyer

“It doesn’t matter if you’re wearing cutoffs with socks up to your knees or whatever,” he says. “It’s all about the riding.”

Q: What makes Calgary unique from other cities you’ve lived in? A: I love Calgary’s rivers. It’s special to have such beautiful, natural areas in the heart of a major city. Like many Calgarians, I cross the Bow on my way to and from work. Every time I see it, I feel grateful that my daily commute includes such beauty. And in the summertime, there’s nothing like a dip in the Elbow after a long day in the office! #yyc #yycbike Photo by @brycemeyer

All of which shows that bikes can be a seamless part of any city.

The sharing economy comes to bikes, but can it replace the government?